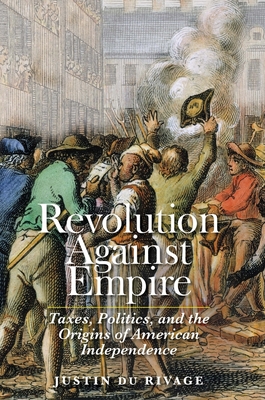 Revolution Against Empire: Taxes, Politics, and the Origins of American Independence

Revolution Against Empire sets the story of American independence within a long and fierce clash over the political and economic future of the British Empire. Justin du Rivage traces this decades-long debate, which pitted neighbors and countrymen against one another, from the War of Austrian Succession to the end of the American Revolution.

As people from Boston to Bengal grappled with the growing burdens of imperial rivalry and fantastically expensive warfare, some argued that austerity and new colonial revenue were urgently needed to rescue Britain from unsustainable taxes and debts. Others insisted that Britain ought to treat its colonies as relative equals and promote their prosperity. Drawing from archival research in the United States, Britain, and France, this book shows how disputes over taxation, public debt, and inequality sparked the American Revolution--and reshaped the British Empire.

Revolution Against Empire: Taxes, Politics, and the Origins of American Independence

Justin duRivage received Ph.D. from Yale University in 2013 and spent two years as Acting Assistant Professor of History at Stanford University. He is currently an associate research scientist at Yale where he conducts research on the history of political instability, political economy, and revolution.

He is author of Revolution against Empire: Taxes, Politics, and the Origins of American Independence (Yale University Press 2017), a new global history of American independence that places issues of ideology, fiscal policy, and empire at the heart of the origins of the American Revolution. In addition to his writing and research, he also manages the CHESS website, blog, and social media presence.