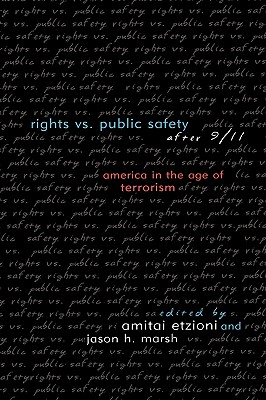 Rights vs. Public Safety after 9/11: America in the Age of Terrorism

Since the attacks of September 11, 2001, the tension between civil rights and public safety has dominated public discourse. On issues ranging from racial profiling to military tribunals, Americans have had to ask whether it is possible for the United States to defend itself against terrorism without violating the values and principles that lie at the heart of its democratic order. In Rights vs. Public Safety after 9/11, some of the nation's leading legal experts and social critics confront this question head-on. The contributors offer measured, often communitarian, approaches to topics such as the changes in United States immigration policy after September 11th, the practical and moral difficulties of racial profiling, the ethical dilemmas of an emergency response to a bioterrorist attack, and the role of the government in promoting national service. This balanced compilation of essays highlights where government will need to expand its authority in the fight against terrorism, where it risks overreaching, and how this new era might strengthen American society.
Rights vs. Public Safety after 9/11: America in the Age of Terrorism