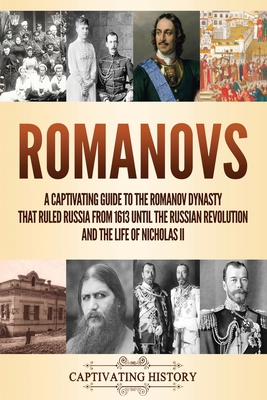 Romanovs: A Captivating Guide to the Romanov Dynasty that Ruled Russia From 1613 Until the Russian Revolution and the Life of Nicholas II

If you want to discover the captivating history of the Romanovs and Nicholas II, then keep reading...

Two captivating manuscripts in one book:

An undoubtedly interesting, exciting, and dramatic chapter of Russian history was ruled over by the Romanov dynasty.

This powerful ruling family came to power shortly after the frightening rule of a legendary figure in Russian history: Ivan the Terrible. After murdering his own son and unborn grandson, Ivan died without an heir, resulting in the formation of a new dynasty. This was the Romanov family.

The Romanovs included some of the most famous names in all of history, from Peter the Great, who expanded its borders, to the mighty Empress Catherine the Great, a powerful female ruler in a time of rife male supremacy and who is still a symbol of feminine power to this day. The Romanovs ruled from the end of the Middle Ages to the dawn of a modern era that forcefully rejected the last Romanovs from a nation that no longer tolerated a monarchy. And every last one of these mighty monarchs had quirks and idiosyncrasies, likes and dislikes, pasts that were often troubled, and complicated family lives.

Every one of them was a person, complex, intricate, flawed, and fascinating. Their stories range from the beautiful to the tragic to the bizarre. And in this book, they all are laid out for you to enjoy.

Here are just some of the topics covered in part 1 of this book:

Here are just some of the topics covered in part 2 of this book:

So if you want to learn more about the Romanovs and Nicholas II, scroll up and click the add to cart button!

Romanovs: A Captivating Guide to the Romanov Dynasty that Ruled Russia From 1613 Until the Russian Revolution and the Life of Nicholas II