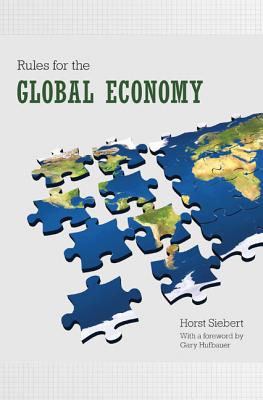 Rules for the Global Economy

Rules for the Global Economy is a timely examination of the conditions under which international rules of globalization come into existence, enabling world economic and financial systems to function and stabilize. Horst Siebert, a leading figure in international economics, explains that these institutional arrangements, such as the ones that govern banking, emerge when countries fail to solve economic problems on their own and cede part of their sovereignty to an international order. Siebert demonstrates that the rules result from a trial-and-error process--and usually after a crisis--in order to prevent pointless transaction costs and risks.

Using an accessible and nonmathematical approach, Siebert links the rules to four areas: international trade relations, factor movements, financial flows, and the environment. He looks at the international division of labor in the trade of goods and services; flow of capital; diffusion of technology; migration of people, including labor and human capital; protection of the global environment; and stability of the monetary-financial system. He discusses the role of ethical norms and human rights in defining international regulations, and argues that the benefits of any rules system should be direct and visible. Comprehensively supporting rules-based interactions among international players, the book considers future issues of the global rules system.
Rules for the Global Economy

After studying in Cologne and at Wesleyan University in Connecticut, doctorate (1965) and habilitation (1969) in Münster, he was called to the Universities of Mannheim (1969) and Constance (1984). In 1989, Siebert moved to the Christian-Albrechts-University of Kiel and succeeded Herbert Giersch as President of the Kiel Institute. He was also a member of the German Council of Economic Experts for a large part of his term of office (1990 - 2003).

Siebert introduced environmental economic research at the Kiel Institute and focused on systemic ruptures in Germany and the world after 1989. He focused the Institute's research and consulting on institution-building in post-socialist societies, on the connections between monetary stabilization, real economic adjustment and institutional incentives, and international debt crises. Siebert was in great demand as a consultant in international bodies (EU, IMF, World Economic Forum). He made an impact on the public interested in economic policy through numerous publications and media appearances, in which he warned of undesirable developments on labor markets and the dangers of false incentives in the economy.

After his retirement, Siebert remained active in research and consulting and taught at the Bologna Center of the Paul H. Nitze School for Advanced Studies. Numerous textbooks, among others on foreign trade and environmental economics, established his reputation as an outstanding teacher.