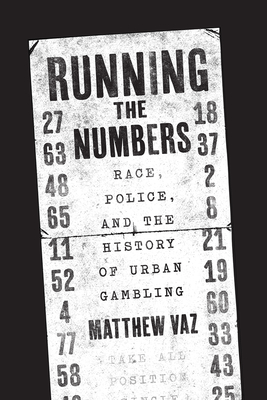 Running the Numbers: Race, Police, and the History of Urban Gambling

Every day in the United States, people test their luck in numerous lotteries, from state-run games to massive programs like Powerball and Mega Millions. Yet few are aware that the origins of today's lotteries can be found in an African American gambling economy that flourished in urban communities in the mid-twentieth century. In Running the Numbers, Matthew Vaz reveals how the politics of gambling became enmeshed in disputes over racial justice and police legitimacy. As Vaz highlights, early urban gamblers favored low-stakes games built around combinations of winning numbers. When these games became one of the largest economic engines in nonwhite areas like Harlem and Chicago's south side, police took notice of the illegal business--and took advantage of new opportunities to benefit from graft and other corrupt practices. Eventually, governments found an unusual solution to the problems of illicit gambling and abusive police tactics: coopting the market through legal state-run lotteries, which could offer larger jackpots than any underground game. By tracing this process and the tensions and conflicts that propelled it, Vaz brilliantly calls attention to the fact that, much like education and housing in twentieth-century America, the gambling economy has also been a form of disputed terrain upon which racial power has been expressed, resisted, and reworked.
Running the Numbers: Race, Police, and the History of Urban Gambling