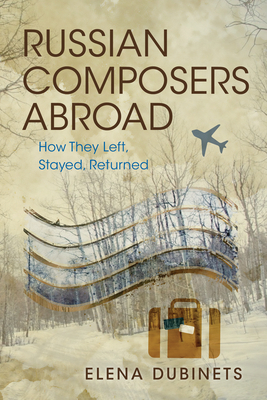 As waves of composers migrated from Russia at the end of the 20th century, they represented their native country while also grappling with the complex struggle between their own traditions and those of their adopted homes.

Russian Composers Abroad explores the self-identity of these �migr�s, especially those who left between the 1970s and the collapse of the USSR, and how aspects of their diasporic identities played out in their music. Difficult decisions about belonging shaped their careers and the personal freedoms feeding their creativity. In most cases, their music does not actually reveal their nationality. In Russian Composers Abroad, Elena Dubinets challenges essentialist understandings of Russian music as congruent with so-called Russianness in music.

As a Russian �migr� herself, Dubinets soberly scrutinizes how, given the multitude of influences inevitably affecting these composers' creative expressions, critics and listeners are wrong to identify them as simply Russian.

A high-profile artistic leader and music scholar, Elena Dubinets was appointed Artistic Director of the London Philharmonic Orchestra from September 2021, having previously held top artistic planning positions at the Atlanta and Seattle symphony orchestras. In 2018 she was named one of Musical America’s Professionals of the Year. Serving the wider music community, she has held appointments on the Recording Academy Board of Directors and as Chair of the City of Seattle Music Commission.?

Elena is a caring impressaria whose goal is to mirror the values of the community in projects that bring people together to create and enjoy deep, meaningful explorations within music genres. An influencer who addresses both local and global issues while building organisational capacity and advancing an organisation’s mission in the communities that it serves, Elena is uniquely steeped in devising and presenting exciting experiences that people can’t stop talking about.

Harnessing social interaction around important issues is key to Elena’s work. She is a passionate and persistent promoter of BIPOC and female composers and artists, as well as an initiator of projects striving to reflect our time for all people, fostering a culture of learning, and undoing historic inequities. She has envisioned and brought to successful premieres more than 100 new works by composers from all over the globe, organised tours to four continents, and overseen multiple Grammy-winning recording projects. Many of her projects have been featured in The New Yorker, The New York Times and other publications.

As co-executive producer of the Seattle Symphony Media, Elena oversaw all its recordings and broadcasts in the first five years of the label’s existence, which led to five Grammys and the 2018 Gramophone’s Orchestra of the Year awards for the Seattle Symphony. Also in Seattle, she was a key management lead overseeing the construction of the experimental music and learning centre Octave 9 at Benaroya Hall, ensuring that the architectural and technology elements met specific community and programming needs. As Chief Artistic Officer of the Atlanta Symphony, she provided leadership for developing a unified mission-focused plan for artistic and educational programming and for cross-campus collaborations with other resident companies of the Woodruff Arts Center (Alliance Theater and the High Museum of Arts).

Elena has taught at universities in the US, Russia and Costa Rica; published five books; and written hundreds of articles, liner and programme notes in multiple languages. Her latest book, Russian Composers Abroad: How They Left, Stayed, Returned, was published by Indiana University Press in 2021.

Dubinets received her MA and PhD degrees from the Moscow State Tchaikovsky Conservatory in Russia, lived in the USA since 1996, and moved to London in 2021.