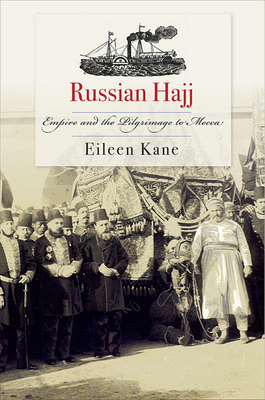 Russian Hajj: Empire and the Pilgrimage to Mecca

In the late nineteenth century, as a consequence of imperial conquest and a mobility revolution, Russia became a crossroads of the hajj, the annual Muslim pilgrimage to Mecca. The first book in any language on the hajj under tsarist and Soviet rule, Russian Hajj tells the story of how tsarist officials struggled to control and co-opt Russia's mass hajj traffic, seeing it as not only a liability but also an opportunity. To support the hajj as a matter of state surveillance and control was controversial, given the preeminent position of the Orthodox Church. But nor could the hajj be ignored, or banned, due to Russia's policy of toleration of Islam. As a cross-border, migratory phenomenon, the hajj stoked officials' fears of infectious disease, Islamic revolt, and interethnic conflict, but Eileen Kane innovatively argues that it also generated new thinking within the government about the utility of the empire's Muslims and their global networks.

Russian Hajj: Empire and the Pilgrimage to Mecca

Eileen Kane is Associate Professor of Modern European History at Connecticut College, where she also directs the Program in Global Islamic Studies.

She is the author of Russian Hajj: Empire and the Pilgrimage to Mecca (Cornell, 2015), which won the Marshall Shulman Book Prize from ASEEES (2016), and received Honorable Mention for the Reginald Zelnik Book Prize in History from ASEEES and the Heldt Prize for Best Book by a Woman in Slavic/Eastern European/Eurasian Studies from AWSS (also 2016).

Kane is a specialist in modern Russian history with a particular interest in religion, migrations, and Russia-Middle East connections. She earned her Ph.D. from Princeton University, and her A.B. from Brown University. Between college and graduate school, she spent two years studying in Istanbul, Turkey on a Fulbright grant.

She is currently finishing up a year training in Middle East Studies at Brown University on a Mellon New Directions Fellowship. Her new book project is a synthetic history of Russia and the Middle East, told through a focus on migrations. She is grateful to the ASEEES Nominating Committee for inviting her to stand as a candidate for ASEEES Board of Directors, and would be honored to represent her colleagues in this elected position.