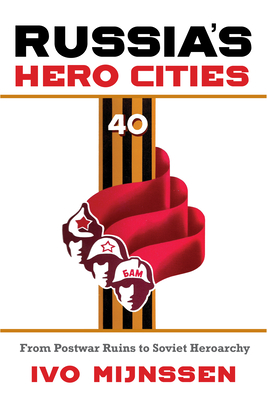 Russia's Hero Cities: From Postwar Ruins to the Soviet Heroarchy

World War II, known as the Great Patriotic War to Russians, ravaged the Soviet Union and traumatized those who survived. After the war, memory of this anguish was often publicly repressed under Stalin. But that all changed by the 1960s. Under Brezhnev, the idea of the Great Patriotic War was transformed into one of victory and celebration.

In Russia's Hero Cities, Ivo Mijnssen reveals how contradictory national recollections were revised into an idealized past that both served official needs and offered a narrative of heroism. This triumphant narrative was most evident in the creation of 13 Hero Cities, now located across Russia, Belarus, and Ukraine. These cities, which were host to some of the fiercest and most famous battles, were named champions. Brezhnev's government officially recognized these cities with awards, financial contributions, and ritualized festivities. Their citizens also encountered the altered history at every corner--on manicured battlefields, in war memorials, and through stories at the kitchen table. Using a rich tapestry of archival material, oral history interviews, and newspaper articles, Mijnssen provides a thorough exploration of two cities in particular, Tula and Novorossiysk.

By exploring the significance of Hero Cities in Soviet identity and the enduring but conflicted importance they hold for Russians today, Russia's Hero Cities exposes how the Great Patriotic War no longer has the power to mask the deep rifts still present in Russian society.

Russia's Hero Cities: From Postwar Ruins to the Soviet Heroarchy

Ivo Mijnssen was born in Zurich in 1982. He studied sociology and Eastern European history.

In May 2015 he completed his dissertation at the University of Basel on the political and social role of the memory of the Second World War in the Soviet Union. He completed his bachelor's degree at Brown University in the USA and spent a long time doing research at Stanford University, Ukraine and various Russian cities during his doctorate.

In addition, he worked regularly as a journalist, including for the “Velojournal”, the website truthdig.com and the NZZ. After completing a traineeship in the International Department, he was responsible for Central and Eastern Europe as an editor from May 2015. He has been a correspondent in Vienna since April 2019 and writes about Austria, Hungary, Poland, the Czech Republic and Slovakia.