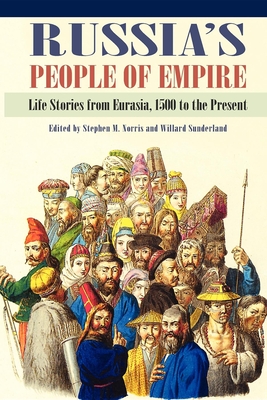 Russia's People of Empire: Life Stories from Eurasia, 1500 to the Present

A fundamental dimension of the Russian historical experience has been the diversity of its people and cultures, religions and languages, landscapes and economies. For six centuries this diversity was contained within the sprawling territories of the Russian Empire and the Soviet Union, and it persists today in the entwined states and societies of the former USSR. Russia's People of Empire explores this enduring multicultural world through life stories of 31 individuals--famous and obscure, high born and low, men and women--that illuminate the cross-cultural exchanges at work from the late 1500s to post-Soviet Russia. Working on the scale of a single life, these microhistories shed new light on the multicultural character of the Russian Empire, which both shaped individuals' lives and in turn was shaped by them.

Russia's People of Empire: Life Stories from Eurasia, 1500 to the Present

Stephen M. Norris is the Walter E. Havighurst Professor of Russian History and the Director of the Havighurst Center for Russian and Post-Soviet Studies. Norris came to Miami in 2002, becoming the second faculty associate of the Havighurst Center, after receiving his Ph.D. in History that year from the University of Virginia. He was promoted to Associate Professor in 2008 and to Professor in 2012. In 2018, Norris received the Distinguished Scholar award from Miami.

Norris’s research focuses on modern Russian history with an emphasis on visual culture and propaganda since the 19th Century. His first book, A War of Images: Russian Popular Prints, Wartime Culture, and National Identity, 1812-1945 (Northern Illinois University Press, 2006), examines how the wartime lubok—a Russia popular print—acted as an important source for expressing Russian national identity across the nineteenth century.

His second book, Blockbuster History in the New Russia: Movies, Memory, Patriotism (Indiana University Press, 2012), analyzes the rise of Hollywood-style historical films in Putin’s Russia and how these new blockbuster movies captured patriotic sentiments. Norris is currently working on a biography of the most significant Soviet political caricaturist, Boris Efimov. Communism’s Cartoonist: Boris Efimov and the Soviet Century will not only tell the tale of Efimov, who lived from 1900 to 2008, it will also be a biography of Soviet propaganda and the Soviet experiment.

Norris will be co-curating the first major exhibit of Efimov’s cartoons, currently planned for 2022 at the Wende Museum in Los Angeles.

In addition to this work, Norris has edited or co-edited six books. His Museums of Communism:  New Memory Sites in Central and Eastern Europe was published by Indiana University Press in 2020. With Elena Baraban (University of Manitoba), he co-edited a book entitled The Akunin Project, the first scholarly study of contemporary Russia’s most popular author (University of Toronto Press, 2021). In 2018, along with Eugene Avrutin (University of Illinois), Norris created the “Russian Shorts” series with Bloomsbury Press.

A series of thought-provoking books published in a slim, beautifully designed format, the books in the series will provide concise examinations of key concepts, personalities, and moments from Russian history and culture. The first book in the series, Pussy Riot: Speaking Punk to Power, was published in 2020. Norris’s The History Painters, on the Russian artists Viktor Vasnetsov and Vasilii Surikov, will also appear in the series in 2022.

As a teacher, Norris has received the Miami University Student Government Outstanding Professor Award (2006) and in 2017 was named the College of Arts and Sciences Distinguished Educator. He teaches a number of classes, including Introduction to Russian and Eurasian Studies, A History of the Russian Empire, Soviet History, History at the Movies, History through Literature, and World History since 1945.