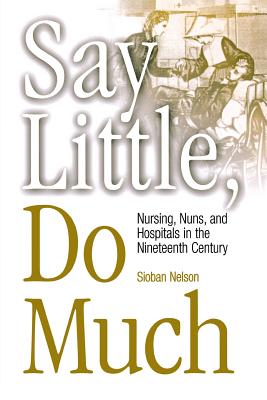 Say Little, Do Much: Nursing and the Establishment of Hospitals by Religious Women

In the nineteenth century, more than a third of American hospitals were established and run by women with religious vocations. In Say Little, Do Much, Sioban Nelson casts light on the work of these women's religious communities. According to Nelson, the popular view that nursing invented itself in the second half of the nineteenth century is historically inaccurate and dismissive of the major advances in the care of the sick as a serious and skilled activity, an activity that originated in seventeenth-century France with Vincent de Paul's Daughters of Charity.

In this comparative, contextual, and critical work, Nelson demonstrates how modern nursing developed from the complex interplay of the Catholic emancipation in Britain and Ireland, the resurgence of the Irish Church, the Irish diaspora, and the mass migrations of the German, Italian, and Polish Catholic communities to the previously Protestant strongholds of North America and mainland Britain. In particular, Nelson follows the nursing Daughters of Charity through the French Revolution and the Second Empire, documenting the relationship that developed between the French nursing orders and the Irish Catholic Church during this period. This relationship, she argues, was to have major significance for the development of nursing in the English-speaking world.

Say Little, Do Much: Nursing and the Establishment of Hospitals by Religious Women