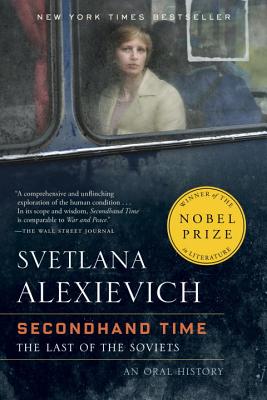 Secondhand Time: The Last of the Soviets

NEW YORK TIMES BESTSELLER - A symphonic oral history about the disintegration of the Soviet Union and the emergence of a new Russia, from Svetlana Alexievich, winner of the Nobel Prize in Literature

When the Swedish Academy awarded Svetlana Alexievich the Nobel Prize, it cited her for inventing a new kind of literary genre, describing her work as a history of emotions--a history of the soul. Alexievich's distinctive documentary style, combining extended individual monologues with a collage of voices, records the stories of ordinary women and men who are rarely given the opportunity to speak, whose experiences are often lost in the official histories of the nation.

In Secondhand Time, Alexievich chronicles the demise of communism. Everyday Russian citizens recount the past thirty years, showing us what life was like during the fall of the Soviet Union and what it's like to live in the new Russia left in its wake. Through interviews spanning 1991 to 2012, Alexievich takes us behind the propaganda and contrived media accounts, giving us a panoramic portrait of contemporary Russia and Russians who still carry memories of oppression, terror, famine, massacres--but also of pride in their country, hope for the future, and a belief that everyone was working and fighting together to bring about a utopia. Here is an account of life in the aftermath of an idea so powerful it once dominated a third of the world.

A magnificent tapestry of the sorrows and triumphs of the human spirit woven by a master, Secondhand Time tells the stories that together make up the true history of a nation. Through the voices of those who confided in her, The Nation writes, Alexievich tells us about human nature, about our dreams, our choices, about good and evil--in a word, about ourselves.

The nonfiction volume that has done the most to deepen the emotional understanding of Russia during and after the collapse of the Soviet Union of late is Svetlana Alexievich's oral history Secondhand Time.--David Remnick, The New Yorker

Secondhand Time: The Last of the Soviets

I’ve been searching for a genre that would be most adequate to my vision of the world to convey how my ear hears and my eyes see life. I tried this and that and finally I chose a genre where human voices speak for themselves. Real people speak in my books about the main events of the age such as the war, the Chernobyl disaster, and the downfall of a great empire. Together they record verbally the history of the country, their common history, while each person puts into words the story of his/her own life.

Today when man and the world have become so multifaceted and diversified the document in art is becoming increasingly interesting while art as such often proves impotent. The document brings us closer to reality as it captures and preserves the originals. After 20 years of work with documentary material and having written five books on their basis I declare that art has failed to understand many things about people.

But I don’t just record a dry history of events and facts, I’m writing a history of human feelings. What people thought, understood and remembered during the event. What they believed in or mistrusted, what illusions, hopes and fears they experienced. This is impossible to imagine or invent, at any rate in such multitude of real details. We quickly forget what we were like ten or twenty or fifty years ago. Sometimes we are ashamed of our past and refuse to believe in what happened to us in actual fact.

Art may lie but document never does. Although the document is also a product of someone’s will and passion. I compose my books out of thousands of voices, destinies, fragments of our life and being. It took me three-four years to write each of my books. I meet and record my conversations with 500-700 persons for each book. My chronicle embraces several generations. It starts with the memories of people who witnessed the 1917 Revolution, through the wars and Stalinist gulags, and reaches the present times. This is a story of one Soviet-Russian soul.