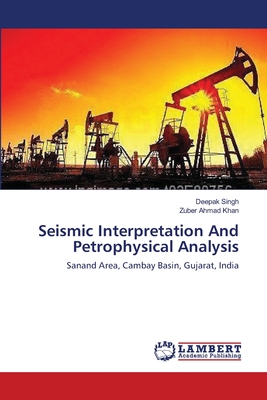 Research work concerns the seismic interpretation and petrophysical analyses. 3-D seismic data have become the key tool used in the oil and gas industry to understand the subsurface. In the present study, seismic attribute analysis has been done by software SeisWare 6.2. The combination of TWT structural contour maps and attribute analysis suggest the suitable location for drilling targets. After ascertaining the drilling targets petrophysical analysis is necessary to know the possible reservoir intervals, average porosity values, shale volume, formation water saturation and movable hydrocarbon of the study area. In the present project the different horizons of the Sanand area of the Cambay Basin, Gujarat, India have been interpreted on the basis of seismic stratigraphy. Among all these different formations the lithology of the Kalol Formation reconstructed by using wireline logs. The lithology mainly has silt, shale and small amount of sand. Coal beds are main characteristic of the Kalol Formation. The depositional environments of Kalol Formation have been determined by various methods that indicate terrestrial to transient/shallow marine environment.
Seismic Interpretation And Petrophysical Analysis