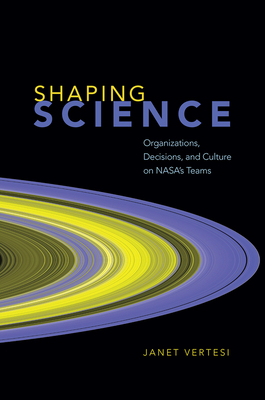 In Shaping Science, Janet Vertesi draws on a decade of immersive ethnography with NASA's robotic spacecraft teams to create a comparative account of two great space missions of the early 2000s. Although these missions featured robotic explorers on the frontiers of the solar system bravely investigating new worlds, their commands were issued from millions of miles away by a very human team. By examining the two teams' formal structures, decision-making techniques, and informal work practices in the day-to-day process of mission planning, Vertesi shows just how deeply entangled a team's local organizational context is with the knowledge they produce about other worlds. Using extensive, embedded experiences on two NASA spacecraft teams, this is the first book to apply organizational studies of work to the laboratory environment in order to analyze the production of scientific knowledge itself. Engaging and deeply researched, Shaping Science demonstrates the significant influence that the social organization of a scientific team can have on the practices of that team and the results they yield.
Shaping Science: Organizations, Decisions, and Culture on Nasa's Teams

Professor Vertesi specializes in the sociology of science, knowledge, and technology. Her primary research site is with NASA's robotic spacecraft teams as an ethnographer. Her books, Seeing like a Rover: Images and Interaction on the Mars Exploration Rover Mission (Chicago, 2015) and Shaping Science: Organizations, Decisions, and Culture on NASA's Teams (Chicago, 2020) draws on her ethnographic studies of missions to Mars, Saturn, and the outer planets to examine how organizations matter to scientific discovery.

She holds a Master's degree from Cambridge and a PhD from Cornell, has received several grants from the National Science Foundation, and has been awarded top prizes for her work from the ASA's Science, Knowledge and Technology Section and Communication, Information Technology and Media Section, and the Society for Social Studies of Science.