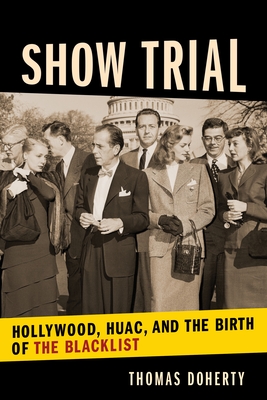 Show Trial: Hollywood, Huac, and the Birth of the Blacklist

In 1947, the Cold War came to Hollywood. Over nine tumultuous days in October, the House Un-American Activities Committee held a notorious round of hearings into alleged Communist subversion in the movie industry. The blowback was profound: the major studios pledged to never again employ a known Communist or unrepentant fellow traveler. The declaration marked the onset of the blacklist era, a time when political allegiances, real or suspected, determined employment opportunities in the entertainment industry. Hundreds of artists were shown the door--or had it shut in their faces.

In Show Trial, Thomas Doherty takes us behind the scenes at the first full-on media-political spectacle of the postwar era. He details the theatrical elements of a proceeding that bridged the realms of entertainment and politics, a courtroom drama starring glamorous actors, colorful moguls, on-the-make congressmen, high-priced lawyers, single-minded investigators, and recalcitrant screenwriters, all recorded by newsreel cameras and broadcast over radio. Doherty tells the story of the Hollywood Ten and the other witnesses, friendly and unfriendly, who testified, and chronicles the implementation of the postwar blacklist. Show Trial is a rich, character-driven inquiry into how the HUAC hearings ignited the anti-Communist crackdown in Hollywood, providing a gripping cultural history of one of the most transformative events of the postwar era.

Show Trial: Hollywood, Huac, and the Birth of the Blacklist

A cultural historian with a special interest in Hollywood cinema, Thomas Doherty is a professor of American Studies at Brandeis University. He is an associate editor for the film magazine Cineaste and film review editor for the Journal of American History. His most recent book is Lindy Lindy Is Kidnapped: How the Media Covered the Crime of the Century, from Columbia University Press 2020.