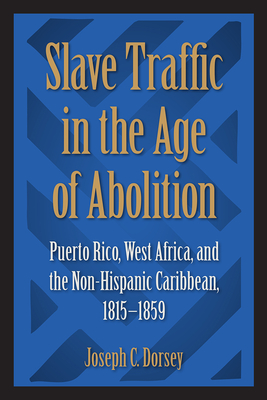 Slave Traffic in the Age of Abolition: Puerto Rico, West Africa, and the Non-Hispanic Caribbean, 1815-1859

Impressive. . . . Some of the book's most salient contributions are the conclusions about the origins of the slaves, the relative importance of the Caribbean trade vis-a-vis the African trade, comparisons between Cuba and Puerto Rico, and the inner workings of the slave trade. In all these areas the author offers fresh perspectives based on new materials.--Luis Martinez-Fernandez, Rutgers University

Drawing on archival sources from six countries, Joseph Dorsey examines the role of Puerto Rico in slave acquisitions after the traffic in slaves was outlawed. He delineates the differences between Puerto Rican and non-Puerto Rican traffic, from procurement in West Africa to influx into the Caribbean, and he scrutinizes the tactics--including inter-Caribbean traffic and conflation of African and Creole identities--by which Puerto Rican interest groups avoided abolitionist scrutiny. He also identifies the extent to which Spain supported these operations.

Dorsey reconstructs the slave trade in Puerto Rico, devoting special attention to the maritime logistics of slave acquisitions--in particular the West African corridors and the nuances of inter-Caribbean assistance. He examines the evidence for the true origins of these slave populations and considers forces beyond European and American politics that influenced the flow of slaves. He explains the complex conditions of the Upper Guinea coast and illustrates the impact of social, political, and economic forces endemic to West African affairs on the Puerto Rican slave market.

Dorsey's meticulous pursuit of evidence unearths the routes and institutions that brought thousands of slaves from West Africa into the eastern Caribbean, turning them into creoles in official records. In a radical departure from present Puerto Rican historiography, he demonstrates that Puerto Rico was an active participant in the illegal slave traffic and exerted a great deal of control over numerous components of the acquisition process, without exclusive dependence on the larger slave-trading polities such as Cuba and Brazil.

Slave Traffic in the Age of Abolition: Puerto Rico, West Africa, and the Non-Hispanic Caribbean, 1815-1859

Professor Dorsey completed his Ph.D. at the University of California - Santa Barbara in 1989. He is an Associate Professor of History and African American Studies at Purdue University. His teaching and research area is in Global History with a specialty in Latin American History and Caribbean.