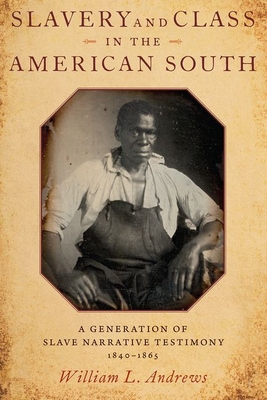 Slavery and Class in the American South: A Generation of Slave Narrative Testimony, 1840-1865

The distinction among slaves is as marked, as the classes of society are in any aristocratic community. Some refusing to associate with others whom they deem to be beneath them, in point of character, color, condition, or the superior importance of their respective masters. Henry Bibb, fugitive slave, editor, and antislavery activist, stated this in his Narrative of the Life and Adventures of Henry Bibb (1849). In William L. Andrews's magisterial study of an entire generation of slave narrators, more than 60 mid-nineteenth-century narratives reveal how work, family, skills, and connections made for social and economic differences among the enslaved of the South. Slave narrators disclosed class-based reasons for violence that broke out between impudent, gentleman, and lady slaves and their resentful mean masters. Andrews's far-reaching book shows that status and class played key roles in the self- and social awareness and in the processes of liberation portrayed in the narratives of the most celebrated fugitives from U.S. slavery, such as Frederick Douglass, Harriet Jacobs, William Wells Brown, and William and Ellen Craft.

Slavery and Class in the American South explains why social and economic distinctions developed and how they functioned among the enslaved. Noting that the majority of the slave narrators came from the higher echelons of the enslaved, Andrews also pays close attention to the narratives that have received the least notice from scholars, those from the most exploited class, the field hands. By examining the lives of the most and least acclaimed heroes and heroines of the slave narrative, Andrews shows how the dividing edge of social class cut two ways, sometimes separating upper and lower strata of slaves to their enslavers' advantage, but at other times fueling pride, aspiration, and a sense of just deserts among some of the enslaved that could be satisfied by nothing less than complete freedom.

Slavery and Class in the American South: A Generation of Slave Narrative Testimony, 1840-1865

Dr. William L. Andrews is E. Maynard Adams Professor of English in UNC's College of Arts and Sciences. Professor Andrews has authored or edited more than 40 books on a wide range of African American literature and culture. He has won fellowships from the National Endowment for the Humanities, the American Council of Learned Societies and the Center for Advanced Study in the Behavioral Sciences.

His first book, "The Literary Career of Charles W. Chesnutt" (1980), deals with a seminal figure in the development of African American and Southern American prose fiction.

Andrews is series editor of "North American Slave Narratives, Beginnings to 1920" (http://docsouth.unc.edu/neh), a complete digitized library of autobiographies and biographies of North American slaves and ex-slaves, funded by the National Endowment for the Humanities, Ameritech and the University of North Carolina at Chapel Hill. He continues to study the historical linkages between white and black writers in the formation of American literature, African American literature and Southern literature.

Source: The University of North Carolina at Chapel Hill