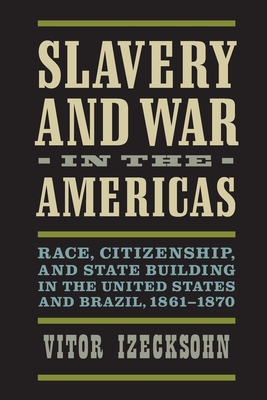 Slavery and War in the Americas: Race, Citizenship, and State Building in the United States and Brazil, 1861-1870

In this pathbreaking new work, Vitor Izecksohn attempts to shed new light on the American Civil War by comparing it to a strikingly similar campaign in South America--the War of the Triple Alliance of 1864-70, which galvanized four countries and became the longest large-scale international conflict in the history of the Americas. Like the Union in its conflict with the Confederacy, Brazil was faced with an enemy of inferior resources and manpower--in their case, Paraguay--that nonetheless proved extremely difficult to defeat. In both cases, the more powerful army had to create an elaborate war machine controlled by the central state to achieve victory.

While it was not the official cause of either conflict, slavery weighed heavily on both wars. When volunteers became scarce, both the Union and Brazilian armies resorted to conscription and, particularly in the case of the Union Army, the enlistment of freedmen of African descent. The consequences of the Union's recruitment of African Americans would extend beyond the war years, contributing significantly to emancipation and reform in the defeated South.Taken together, these two major powers' experiences reveal much about state building, army recruitment, and the military and social impact of slavery. The many parallels revealed by this book challenge the assumption that the American Civil War was an exceptional conflict.

A Nation Divided: Studies in the Civil War Era

Slavery and War in the Americas: Race, Citizenship, and State Building in the United States and Brazil, 1861-1870

Vitor Izecksohn is Professor of History at the Universidade Federal do Rio de Janeiro, Brazil, and the coeditor of New Brazilian Military History.