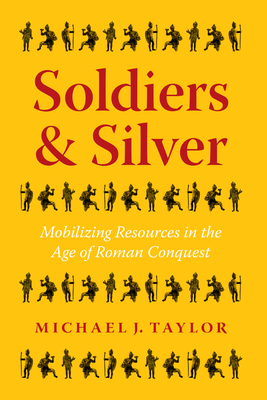 Soldiers and Silver: Mobilizing Resources in the Age of Roman Conquest

By the middle of the second century BCE, after nearly one hundred years of warfare, Rome had exerted its control over the entire Mediterranean world, forcing the other great powers of the region--Carthage, Macedonia, Egypt, and the Seleucid empire--to submit militarily and financially. But how, despite its relative poverty and its frequent numerical disadvantage in decisive battles, did Rome prevail?

Michael J. Taylor explains this surprising outcome by examining the role that manpower and finances played, providing a comparative study that quantifies the military mobilizations and tax revenues for all five powers. Though Rome was the poorest state, it enjoyed the largest military mobilization, drawing from a pool of citizens, colonists, and allies, while its wealthiest adversaries failed to translate revenues into large or successful armies. Taylor concludes that state-level extraction strategies were decisive in the warfare of the period, as states with high conscription and low taxation raised larger, more successful armies than those that primarily sought to maximize taxation. Comprehensive and detailed, Soldiers and Silver offers a new and sophisticated perspective on the political dynamics and economies of these ancient Mediterranean empires.

Soldiers and Silver: Mobilizing Resources in the Age of Roman Conquest

He holds a Ph.D. in Ancient History from UC Berkeley and an A.B. in History from Princeton University. His research focuses on the Roman Republic and the Hellenistic world during the third and second centuries BC.

His dissertation, a comparative study of state revenues and the military mobilizations of Rome, Carthage, and the Hellenistic kingdoms, examines these metrics of state power against the outcomes of interstate conflict. Other research interests include politics in Republican Rome, Roman military organization, and visual representations of warfare in the ancient world.

While in graduate school, he served as an officer in the California Army National Guard, deploying to Iraq as a platoon leader and Kosovo as a company executive officer.

Source: The University of Texas at Austin and University at Albany SUNY