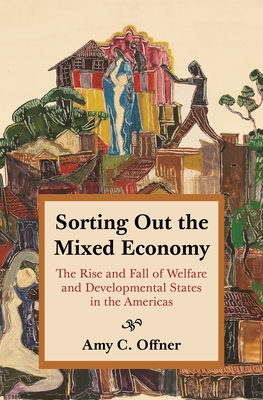 Sorting Out the Mixed Economy: The Rise and Fall of Welfare and Developmental States in the Americas

In the years after 1945, a flood of U.S. advisors swept into Latin America with dreams of building a new economic order and lifting the Third World out of poverty. These businessmen, economists, community workers, and architects went south with the gospel of the New Deal on their lips, but Latin American realities soon revealed unexpected possibilities within the New Deal itself. In Colombia, Latin Americans and U.S. advisors ended up decentralizing the state, privatizing public functions, and launching austere social welfare programs. By the 1960s, they had remade the country's housing projects, river valleys, and universities. They had also generated new lessons for the United States itself. When the Johnson administration launched the War on Poverty, U.S. social movements, business associations, and government agencies all promised to repatriate the lessons of development, and they did so by multiplying the uses of austerity and for-profit contracting within their own welfare state. A decade later, ascendant right-wing movements seeking to dismantle the midcentury state did not need to reach for entirely new ideas: they redeployed policies already at hand.

In this groundbreaking book, Amy Offner brings readers to Colombia and back, showing the entanglement of American societies and the contradictory promises of midcentury statebuilding. The untold story of how the road from the New Deal to the Great Society ran through Latin America, Sorting Out the Mixed Economy also offers a surprising new account of the origins of neoliberalism.

Sorting Out the Mixed Economy: The Rise and Fall of Welfare and Developmental States in the Americas

Amy C. Offner (Ph.D. Columbia University) studies twentieth-century US history in global perspective, with special focus on Latin America.  Her research and teaching address the history of capitalism and political economy, empire and foreign relations, and social and intellectual history.

She is the author of Sorting Out the Mixed Economy: The Rise and Fall of Welfare and Developmental States in the Americas (Princeton University Press, 2019).  The book won the Economic History Society's First Monograph Prize, the Michael H. Hunt Prize for International History from the Society for Historians of American Foreign Relations, the Murdo J. MacLeod Prize from the Latin American and Caribbean Section of the Southern Historical Association, and the Alice Amsden Award from the Society for the Advancement of Socio-Economics.  It was also a finalist for the Berkshire Conference of Women Historians Book Prize and received an honorable mention for the Stuart L. Bernath Prize of the Society for Historians of American Foreign Relations.

The book argues that many of the tools that took apart midcentury welfare and developmental states came, ironically enough, from the repertoire of midcentury statebuilding itself.  Sorting Out the Mixed Economy takes readers through half a century of US and Colombian history, offering a transnational history of state formation and capitalist reconstruction since 1945.

In the process, it shows the influence of Latin American developmentalism on the formation of the US welfare state and reveals the midcentury origins of practices that are regarded today as hallmarks of neoliberalism, including austere systems of social welfare provision, changing systems of state decentralization, and novel forms of for-profit and private delegation. Capitalism in the late twentieth century, the book suggests, was not built in simple reaction against midcentury political economy; it was a parasitic formation that appropriated and redeployed key elements of the very order it destroyed.  For reviews and interviews, see Dissent, Plural, New Books in History, Historias, and the Hagley Library.

Offner is now researching two new projects.  Debt in Indian Country is a history of debt among Native Americans during the twentieth century.  The Disappearing Worker travels across the postwar world to offer a transnational history of the unraveling of the employment relationship: the rise of contract and contingent labor and the rise of new forms of ownership and investment that distanced the owners of capital from the claims of workers.  The book connects the fate of US workers to those overseas by situating both within multinational corporations that transported lessons and practices across world regions.

Offner has received fellowships and grants from institutions including the American Council of Learned Societies, the Social Science Research Council, the Charles Warren Center for American History at Harvard University, the Kluge Center at the Library of Congress, the National Endowment for the Humanities, the Inter-American Foundation, the Society for Historians of American Foreign Relations, the Tamiment Library at NYU, Baker Library at Harvard Business School, and the Duke University Center for the History of Political Economy.

Before beginning graduate studies, she worked as a union organizer and an editor at Dollars & Sense, a magazine and book publisher analyzing economic affairs.  In 2008, she worked for the Landmine Survivor Network in Bogotá, Colombia.

Offner has served on over a dozen doctoral committees at the University of Pennsylvania and has been an external reader for MA and PhD theses in the United States and Colombia.  She welcomes inquiries from prospective graduate students.