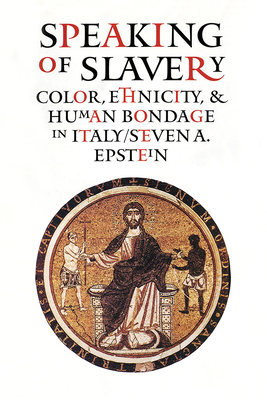 Speaking of Slavery: Color, Ethnicity, and Human Bondage in Italy

In this highly original work, Steven A. Epstein shows that the ways Italians employ words and think about race and labor are profoundly affected by the language used in medieval Italy to sustain a system of slavery. The author's findings about the surprising persistence of the language of slavery demonstrate the difficulty of escaping the legacy of a shameful past.

For Epstein, language is crucial to understanding slavery, for it preserves the hidden conditions of that institution. He begins his book by discussing the words used to conduct and describe slavery in Italy, from pertinent definitions given in early dictionaries, to the naming of slaves by their masters, to the ways in which bondage has been depicted by Italian writers from Dante to Primo Levi and Antonio Gramsci. Epstein then probes Italian legal history, tracing the evolution of contracts for buying, selling, renting, and freeing people. Next he considers the behaviors of slaves and slave owners as a means of exploring how concepts of liberty and morality changed over time. He concludes by analyzing the language of the market, where medieval Italians used words to fix the prices of people they bought and sold.

The first history of slavery in Italy ever published, Epstein's work has important implications for other societies, particularly America's. For too long, Epstein notes, Americans have studied their own slavery as it if were the only one ever to have existed, as if it were the archetype of all others. His book allows citizens of the United States and other former slave-holding nations a richer understanding of their past and present.

Speaking of Slavery: Color, Ethnicity, and Human Bondage in Italy

He is also a co-founder of the Sexualities Project at Northwestern (SPAN). Before joining the Northwestern faculty in 2009, Epstein spent the preceding 15 years on the faculty at the University of California, San Diego. He is a recipient of the John Simon Guggenheim Fellowship, residency fellowships at the Center for Advanced Study in the Behavioral Sciences at Stanford and at the Radcliffe Institute for Advanced Study, and a total of eight book prizes. His work has been funded by the National Science Foundation and the Robert Wood Johnson Foundation.

Professor Epstein studies the “politics of knowledge”—more specifically, the contested production of expert and especially biomedical knowledge, with an emphasis on the interplay of social movements, experts, and health institutions, and with a focus on the politics of sexuality, gender, and race. He is especially known for two books: Inclusion: The Politics of Difference in Medical Research (Chicago, 2007), which received multiple awards, including the American Sociological Association’s Distinguished Book Award; and Impure Science: AIDS, Activism, and the Politics of Knowledge (California, 1996), which also received multiple awards, including the C. Wright Mills Prize.

He also co-edited Three Shots at Prevention: The HPV Vaccine and the Politics of Medicine’s Simple Solutions (Johns Hopkins, 2010), and he coauthored Learning by Heart: AIDS and Schoolchildren in America’s Communities (Rutgers, 1989). Epstein has published in such journals as Social Studies of Science, Body & Society, Sociological Forum, Social Science & Medicine, Theory and Society, and Sexualities.

Epstein’s newest book, The Quest for Sexual Health: How an Elusive Ideal Has Transformed Science, Politics, and Everyday Life, will be published by the University of Chicago Press in February of 2022. The book investigates the diverse initiatives that pursue sexual health—an evocative yet elusive goal. At least since the 1970s, health professionals, researchers, governments, advocacy groups, foundations, commercial interests, and many individuals increasingly have embraced the quest for sexual health, and this aspiration has served as an engine of productivity.

Behind this banner, a wide array of programs have been launched, investigations undertaken, and commodities sold. From sexually transmitted infections to sexual dysfunction to sexual harassment to reproductive health to sexual rights to the market in sexual wellness products, sexual health now signals urgent concerns and substantial investments. It has fueled varied attempts to solve social problems, propelled an array of projects to improve medical care and expand knowledge, and encouraged individuals to “self-optimize” and governments to undertake campaigns of social improvement. Meanwhile, it has become a political battleground where the stakes are competing visions of the future.

The Quest for Sexual Health analyzes the rise, proliferation, uptake, and sprawling consequences of sexual health activities. Conjoining “sexual” with “health” changes both terms: it alters how we conceive of sexuality but also transforms what it means to be healthy, prompting new expectations of what medicine can provide. The book provides critical tools to assess a range of potential consequences of the investment in sexual health and to consider how those consequences vary across groups and identities.

By exploring debates about the defining of normality, the roles of experts of different sorts, and the relative emphases placed on risk and pleasure when considering sexual matters, it seeks to identify pathways that promote pleasure, equality, and social justice.

Epstein currently serves on the editorial boards of a number of journals, including Social Studies of Science and Science, Technology, & Human Values. He is a past chair of the Science, Knowledge, and Technology Section of the American Sociological Association. At Northwestern, he and Prof. Héctor Carrillo co-founded the Sexualities Project at Northwestern (SPAN), an initiative that promotes interdisciplinary research and education on sexuality and health in social context. SPAN funds faculty and graduate student research, holds a postdoctoral fellowship competition, and organizes workshops and reading groups, among other activities.