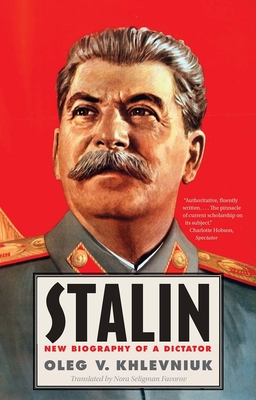 Stalin: New Biography of a Dictator

Josef Stalin exercised supreme power in the Soviet Union from 1929 until his death in 1953. During that quarter-century, by Oleg Khlevniuk's estimate, he caused the imprisonment and execution of no fewer than a million Soviet citizens per year. Millions more were victims of famine directly resulting from Stalin's policies. What drove him toward such ruthlessness? This essential biography, by the author most deeply familiar with the vast archives of the Soviet era, offers an unprecedented, fine-grained portrait of Stalin the man and dictator. Without mythologizing Stalin as either benevolent or an evil genius, Khlevniuk resolves numerous controversies about specific events in the dictator's life while assembling many hundreds of previously unknown letters, memos, reports, and diaries into a comprehensive, compelling narrative of a life that altered the course of world history.

In brief, revealing prologues to each chapter, Khlevniuk takes his reader into Stalin's favorite dacha, where the innermost circle of Soviet leadership gathered as their vozhd lay dying. Chronological chapters then illuminate major themes: Stalin's childhood, his involvement in the Revolution and the early Bolshevik government under Lenin, his assumption of undivided power and mandate for industrialization and collectivization, the Terror, World War II, and the postwar period. At the book's conclusion, the author presents a cogent warning against nostalgia for the Stalinist era.

Stalin: New Biography of a Dictator

His previous Yale books include The History of the Gulag, Master of the House: Stalin and His Inner Circle, and several collections of Stalin's correspondence.

Khlevniuk was awarded the Alexander Nove Prize (with Yoram Gorlizki) by the British Association for Slavonic and East European Studies 2004 for the book Cold Peace: Stalin and the Soviet Ruling Circle, 1945-1953.

In 2016, Pushkin House UK recognized his Stalin: New Biography of a Dictator as "the best Russian book in English translation" for that year