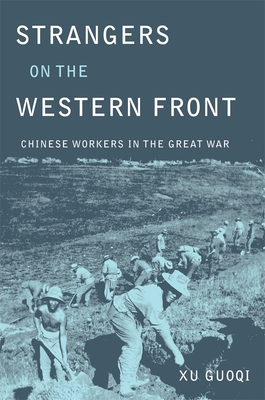 Strangers on the Western Front

During World War I, Britain and France imported workers from their colonies to labor behind the front lines. The single largest group of support labor came not from imperial colonies, however, but from China. Xu Guoqi tells the remarkable story of the 140,000 Chinese men recruited for the Allied war effort.

These laborers, mostly illiterate peasants from north China, came voluntarily and worked in Europe longer than any other group. Xu explores China's reasons for sending its citizens to help the British and French (and, later, the Americans), the backgrounds of the workers, their difficult transit to Europe--across the Pacific, through Canada, and over the Atlantic--and their experiences with the Allied armies. It was the first encounter with Westerners for most of these Chinese peasants, and Xu also considers the story from their perspective: how they understood this distant war, the racism and suspicion they faced, and their attempts to hold on to their culture so far from home.

In recovering this fascinating lost story, Xu highlights the Chinese contribution to World War I and illuminates the essential role these unsung laborers played in modern China's search for a new national identity on the global stage.

Strangers on the Western Front

Professor Xu Guoqi was born in China and taught both in Asia and the USA before joining the University of Hong Kong's History Department. He writes and has published widely in both Chinese and English on various topics.

Professor Xu is a leading authority of international history of modern China. His peers in Society of Chinese Historians in the United States (CHUS) recently honored him with the 2008 academic excellence award.

The Phoenix Television (Hong Kong) devoted two whole episodes of its book program to focus on this book, a rare treatment for any authors. His ideas and comments have been frequently sought by media such as Associated Press, Reuters, the New York Times, the South China Morning Post. His invited articles appeared in the Washington Post, New York Times, and other places.

Professor Xu’s research has attracted worldwide attention and his research profiles and interviews appeared in both the United States and China. Most recently two long interviews of him regarding his research on Chinese laborers in France during the First World War and the May Fourth Movement were published respectively in 2009 from China in China Archives China Archives’ February issue (????) and the July issue of Xi Hu Zazhi (????), a popular literary journal.

Source: The University of Hong Kong Department of History