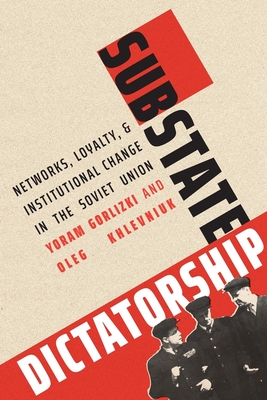 How do local leaders govern in a large dictatorship? What resources do they draw on? Yoram Gorlizki and Oleg Khlevniuk examine these questions by looking at one of the most important authoritarian regimes of the twentieth century. Starting in the early years after the Second World War and taking the story through to the 1970s, they chart the strategies of Soviet regional leaders, paying particular attention to the forging and evolution of local trust networks.

I have been at the University of Manchester since 1994, as a Professor since 2006. I did my undergraduate degree at Sidney Sussex College, Cambridge, before going on to a one year  postgraduate Russian language diploma at the University of Strathclyde and a doctorate at St Antony's College, Oxford, under the supervision of Mary McAuley. From 1991-1994 I held a Junior Research Fellowship at Fitzwilliam College, Cambridge.

I have been the sole principal investigator on two ESRC grants (R00022676, R000230880), the outputs of both of which were rated "outstanding" by ESRC assessors, and the recipient of numerous small grants from the British Academy and other bodies. In 2005 my co-authored book Cold Peace won the Alec Nove Prize of the British Association of Slavic and East European Studies for its "outstanding contribution to the field" and was selected as a CHOICE "Outstanding Academic Title.

My new co-authored book, Substate Dictatorship: Networks, Loyalty, and Institutional Change in the Soviet Union (2020) is now out from Yale. I am on the Editorial Board of the journal Government and Opposition and was, from 2001-2007, its review editor. I have been a member of the ESRC Politics, Economics and Geography Research College and was, from 2000-2005, Chair of the Validation Panel for the Moscow School of Social Sciences.