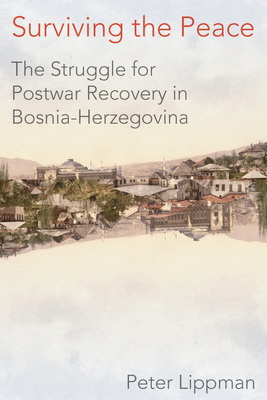 Surviving the Peace: The Struggle for Postwar Recovery in Bosnia-Herzegovina

Surviving the Peace is a monumental feat of ground-level reporting describing two decades of postwar life in Bosnia, specifically among those fighting for refugee rights of return. Unique in its breadth and profoundly humanitarian in its focus, Surviving the Peace situates digestible explanations of the region's bewilderingly complex recent history among interviews, conversations, and tableaus from the lives of everyday Bosnians attempting to make sense of what passes for normal in a postwar society. Essential reading for students of the former Yugoslavia and anyone interested in postwar or post-genocide studies, Surviving the Peace is an instant classic of long-form reporting, an impossible accomplishment without a lifetime of dedication to a place and people. Peter Lippman's website is http: //survivingthepeace.org/.
Surviving the Peace: The Struggle for Postwar Recovery in Bosnia-Herzegovina

Peter Lippman, born in Seattle, is a lifelong human rights activist. On occasion he does field reporting and journalistic work.

A fascination with the ethnography of southeast Europe led Lippman to Yugoslavia in 1981. Having studied what was then called Serbo-Croatian, he lived in the former Yugoslavia in the early 1980s, studying music and language. During the war in the early 1990s he formed a grassroots organization in Seattle to support a family of Bosnian refugees.

Lippman lived and worked in Bosnia-Herzegovina for two years after the war, and has returned over 15 times since then. For nearly five years he worked for the human rights organization The Advocacy Project as a researcher and writer in Bosnia-Herzegovina, Kosovo, Guatemala, and Ecuador. He speaks Bosnian-Croatian-Serbian, Turkish, Spanish, and Yiddish.

Over more than two decades, Lippman has closely followed the efforts of grassroots activists to return to their prewar homes, to fight corruption and discrimination, and to regain their rights. He has written about the history, politics and culture of the region and has written for the Christian Science Monitor, The Progressive,  Washington Report on Middle East Affairs, The Seattle Times, and on-line magazines such as openDemocracy.net. He has also done extensive research and writing on the Israeli-Palestinian conflict.

You can find much of Lippman's writing on Bosnia-Herzegovina and the surrounding region at his page on the Balkan Witness web site.