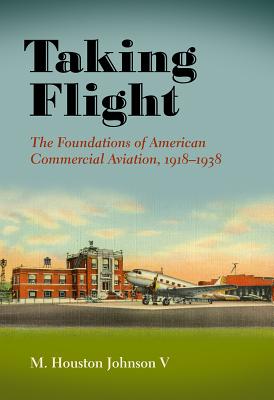 Taking Flight explores the emergence of commercial aviation between the world wars--and in the midst of the Great Depression--to show that the industry's dramatic growth resulted from a unique combination of federal policy, technological innovations, and public interest in air travel.

Historian M. Houston Johnson V traces the evolution of commercial flying from the US Army's trial airmail service in the spring of 1918 to the passage of the pivotal Air Commerce Act of 1938. Johnson emphasizes the role of federal policy--particularly as guided by both Herbert Hoover and Franklin Roosevelt--to reveal the close working relationship between federal officials and industry leaders, as well as an increasing dependence on federal assistance by airline, airframe, and engine manufacturers.

Taking Flight highlights the federal government's successful efforts to foster a nascent industry in the midst of an economic crisis without resorting to nationalization, a path taken by virtually all European countries during the same era. It also underscores an important point of continuity between Hoover's policies and Roosevelt's New Deal (a sharp departure from many interpretations of Depression-era business history) and shows how both governmental and corporate actors were able to harness America's ongoing fascination with flying to further a larger economic agenda and facilitate the creation of the world's largest and most efficient commercial aviation industry.

This glimpse into the golden age of flight contributes not only to the history of aviation but also to the larger history of the United States during the Great Depression and the period between the world wars.
Taking Flight: The Foundations of American Commercial Aviation, 1918-1938

M. Houston Johnson V specializes in the history of the 20th century United States, with an emphasis on aviation history and the New Deal era. He teaches courses including The Progressive Era, The New Deal, War and Society in 20th Century United States History, The Vietnam War, and Historical Methodology.

He has published articles on aviation infrastructure in the Journal of Policy History and the Journal of East Tennessee History; his book, Taking Flight: The Foundations of American Commercial Aviation, 1918-1938, is forthcoming with Texas A&M University Press. Johnson also served as the Associate Editor of the Sage Encyclopedia of Military Science.

Johnson came to VMI in 2012, after receiving degrees from Roanoke College and the University of Tennessee. He has received the Institute Wilbur S. Hinman, Jr. ’26 Research Award (2017), and serves as the faculty advisor for the VMI chapter of the Phi Alpha Theta history honor society, among other activities.