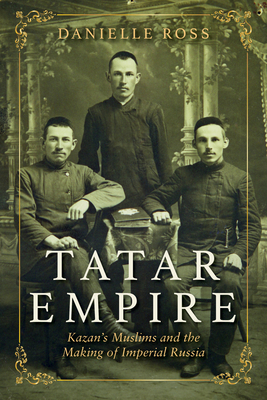 Tatar Empire: Kazan's Muslims and the Making of Imperial Russia

In the 1700s, Kazan Tatar (Muslim scholars of Kazan) and scholarly networks stood at the forefront of Russia's expansion into the South Urals, western Siberia, and the Kazakh steppe. It was there that the Tatars worked with Russian agents, established settlements, and spread their own religious and intellectual cuture that helped shaped their identity in the 19th and early 20th centuries. Kazan Tatars profited economically from Russia's commercial and military expansion to Muslim lands and began to present themselves as leaders capable of bringing Islamic modernity to the rest of Russia's Muslim population. Danielle Ross bridges the history of Russia's imperial project with the history of Russia's Muslims by exploring the Kazan Tatars as participants in the construction of the Russian empire. Ross focuses on Muslim clerical and commercial networks to reconstruct the ongoing interaction among Russian imperial policy, nonstate actors, and intellectual developments within Kazan's Muslim community and also considers the evolving relationship with Central Asia, the Kazakh steppe, and western China. Tatar Empire offers a more Muslim-centered narrative of Russian empire building, making clear the links between cultural reformism and Kazan Tatar participation in the Russian eastward expansion.

Tatar Empire: Kazan's Muslims and the Making of Imperial Russia

Danielle Ross is an Assistant Professor of Asian history, and she teaches pre-modern and modern Islamic and world history. A native of California, Ross has published articles on Muslim participation in the First World War and Islamic law and education in the Russian empire.

She is currently researching Muslim merchant-industrialist networks in the nineteenth and early twentieth-century Russia.