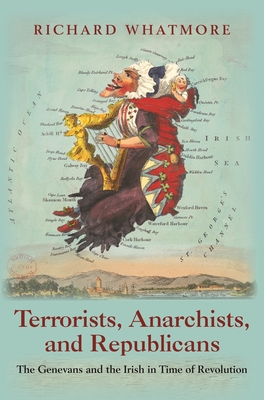 Terrorists, Anarchists, and Republicans: The Genevans and the Irish in Time of Revolution

In 1798, members of the United Irishmen were massacred by the British amid the crumbling walls of a half-built town near Waterford in Ireland. Many of the Irish were republicans inspired by the French Revolution, and the site of their demise was known as Genevan Barracks. The Barracks were the remnants of an experimental community called New Geneva, a settlement of Calvinist republican rebels who fled the continent in 1782. The British believed that the rectitude and industriousness of these imported revolutionaries would have a positive effect on the Irish populace. The experiment was abandoned, however, after the Calvinists demanded greater independence and more state money for their project. Terrorists, Anarchists, and Republicans tells the story of a utopian city inspired by a spirit of liberty and republican values being turned into a place where republicans who had fought for liberty were extinguished by the might of empire.

Richard Whatmore brings to life a violent age in which powerful states like Britain and France intervened in the affairs of smaller, weaker countries, justifying their actions on the grounds that they were stopping anarchists and terrorists from destroying society, religion and government. The Genevans and the Irish rebels, in turn, saw themselves as advocates of republican virtue, willing to sacrifice themselves for liberty, rights and the public good. Terrorists, Anarchists, and Republicans shows how the massacre at Genevan Barracks marked an end to the old Europe of diverse political forms, and the ascendancy of powerful states seeking empire and markets--in many respects the end of enlightenment itself.

Terrorists, Anarchists, and Republicans: The Genevans and the Irish in Time of Revolution

Source: The Conversation US, Inc