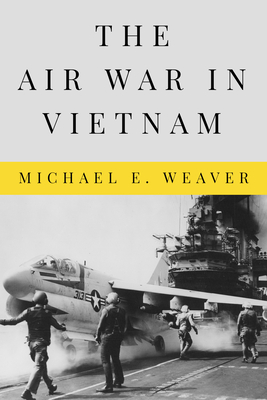 The Air War in Vietnam

The Air War in Vietnam is a deep dive into the effectiveness of air power during the Vietnam War, offering particular evaluation of the extent to which air operations fulfilled national policy objectives. Built from exhaustive research into previously classified and little-known archival sources, Michael Weaver insightfully blends new sources with material from the State Department's Foreign Relations of the United States Series. While Air Force sources from the lion's share of the documentary evidence, Weaver also makes heavy use of Navy and Marine materials.

Breaking air power into six different mission sets--air superiority, aerial refueling, airlift, close air support, reconnaissance, and coercion & interdiction--Weaver assesses the effectiveness of each of these endeavors from the tactical level of war and adherence to US policy goals. Critically, The Air War in Vietnam perceives of the air campaign as a siege of North Vietnam.

While American air forces completed most of their air campaigns successfully on the tactical, operational, and strategic levels, what resulted was not a failure in air power, but a failure in the waging of war as a whole. The Air War in Vietnam tackles controversies and unearths new evidence, rendering verdicts both critical and positive, arguing that war, however it is waged, is ultimately effective only when it achieves a country's policy objectives.

The Air War in Vietnam

Michael E. Weaver is an Associate Professor of History in the Department of Airpower at the United States Air Force’s Air Command and Staff College. He specializes in aviation, Cold War, and American history and is the author of Guard Wars: The 28th Infantry Division in World War II. He currently lives in Wetumpka, Alabama.

I teach military history and international relations and on occasion lecture to large audiences. I research and write air power history, and am currently writing my second and third books: "National Policy and Air Power Effectiveness during the Vietnam War," and "Weapons, Tactics and Technology for Air Defense during the Cold War."