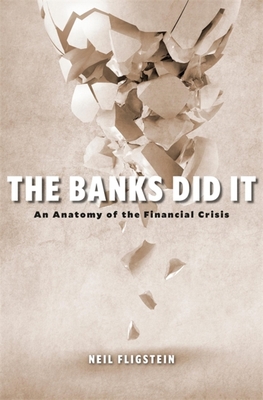 The Banks Did It: An Anatomy of the Financial Crisis

A comprehensive account of the rise and fall of the mortgage-securitization industry, which explains the complex roots of the 2008 financial crisis.

More than a decade after the 2008 financial crisis plunged the world economy into recession, we still lack an adequate explanation for why it happened. Existing accounts identify a number of culprits--financial instruments, traders, regulators, capital flows--yet fail to grasp how the various puzzle pieces came together. The key, Neil Fligstein argues, is the convergence of major US banks on an identical business model: extracting money from the securitization of mortgages. But how, and why, did this convergence come about? The Banks Did It carefully takes the reader through the development of a banking industry dependent on mortgage securitization. Fligstein documents how banks, with help from the government, created the market for mortgage securities. The largest banks--Countrywide Financial, Bear Stearns, Citibank, and Washington Mutual--soon came to participate in every aspect of this market. Each firm originated mortgages, issued mortgage-backed securities, sold those securities, and, in many cases, acted as their own best customers by purchasing the same securities. Entirely reliant on the throughput of mortgages, these firms were unable to alter course even when it became clear that the market had turned on them in the mid-2000s. With the structural features of the banking industry in view, the rest of the story falls into place. Fligstein explains how the crisis was produced, where it spread, why regulators missed the warning signs, and how banks' dependence on mortgage securitization resulted in predatory lending and securities fraud. An illuminating account of the transformation of the American financial system, The Banks Did It offers important lessons for anyone with a stake in avoiding the next crisis.
The Banks Did It: An Anatomy of the Financial Crisis

Neil D. Fligstein is the Class of 1939 Chancellor's Professor of Sociology and the Director of the Center for Culture, Organization, and Politics at the Institute for Research on Labor and Employment at the University of California, Berkeley.

His main research interests lie in the fields of economic sociology, organizational theory, political sociology, and the sociology of work. He has been interested in developing and using a sociological view of how new social institutions emerge, remain stable, and are transformed to study a wide variety of seemingly disparate phenomena including the history of the large American corporation and the construction of a European legal and political system.

He has used this framework to create a more general view of how markets and states are mutually constitutive and applied this framework to trying to make sense of how global markets work. In 2008, he published Euroclash: The EU, European Identity, and the future of Europe (Oxford, Eng.: Oxford University Press). The central theme of the book is to document how European integration in the past 20 years has created a partial integration of European societies along political, economic, but most importantly social lines. Europe has mostly brought managers, professionals, and other highly educated people into contact. It is this 13% or so of the population that is most European.

But the remaining population is mostly wedded to conceptions of self that are distinctly national. His most recent work has focused on the financial crisis that began in 2007. He chronicles how investment, commercial, and savings and loans banks converged on a vertically integrated model of producing mortgages and securities and their lockstep move into the subprime market that ultimately set off the collapse. Using a quantitative data set, Fligstein shows that the main cause of the crisis was the purchase of American mortgage backed securities by banks in the developed world.

He focuses on how social relations shape and alter markets. His research of corporate governance, the emergence of a market for corporate control through stock markets, and the role of law and regulation in all of these shaped the agenda for economic sociology. Subsequent work on how culture and identities affect markets and economic organization more broadly laid the groundwork for Euro Clash (2008), a study of the history and social consequences of the (partial) integration of Europe in the era of the European Union. Winner of the American Sociology Association's Economic Sociology section best book award (2003) for Architecture of Markets.