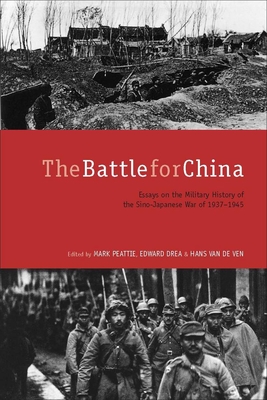 The Battle for China: Essays on the Military History of the Sino-Japanese War of 1937-1945

Winner of the 2012 Society for Military History Distinguished Book Award (non-US). Most studies of the Sino-Japanese War are presented from the perspective of the West. Departing from this tradition, The Battle for China brings together Chinese, Japanese, and Western scholars to provide a comprehensive and multifaceted overview of the military operations that shaped much of what happened in political, economic, and cultural realms. The volume's diverse contributors have taken pains to sustain a scholarly, dispassionate tone throughout their analyses of the course and the nature of military operations, from the Marco Polo Bridge Incident to the final campaigns of 1945. They present Western involvement in Sino-Japanese contexts, and establish the war's place in World War II and world history in general.
The Battle for China: Essays on the Military History of the Sino-Japanese War of 1937-1945

Mark R. Peattie was a visiting scholar at the Walter H. Shorenstein Asia-Pacific Research Center and a research fellow at the Hoover Institution. He was a professor of history emeritus at the University of Massachusetts at Boston, and was the John A. Burns Distinguished Visiting Professor of History at the University of Hawai'i in 1995.

Peattie was a specialist in modern Japanese military, naval, and imperial history. His current research focused on the historical context of Japanese-Southeast Asian relations. He was also directing a pioneering and international collaborative effort of the military history of the study of the Sino-Japanese war of 1937–45 being sponsored by the Asia Center at Harvard University.

He coauthored, with David Evans, Kaigun: Strategy, Tactics and Technology in the Imperial Japanese Navy, 1887–1941 (Naval Institute Press, 1997), winner of a 1999 Distinguished Book Award of the Society for Military History. A sequel, Sunburst: The Rise of Japanese Naval Air Power, 1909–1941, was published by the Naval Institute Press in 2001.

Peattie is also the author of the monograph A Historian Looks at the Pacific War (Hoover Essays in Public Policy, 1995).

He was named an associate in research at the Edwin O. Reischauer Institute of Japanese Studies at Harvard University from 1982 to 1993.

Peattie held a PhD in Japanese history from Princeton University.