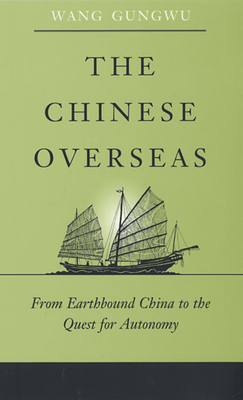 The Chinese Overseas: From Earthbound China to the Quest for Autonomy

The Chinese overseas now number 25 to 30 million, yet the 2,000-year history of Chinese attempts to venture abroad and the underlying values affecting that migration have never before been presented in a broad overview. Despite centuries of prohibition against leaving the land and traveling and settling overseas, the earthbound Chinese--first traders, then peasants and workers--eventually found new sources of livelihood abroad. The practice of sojourning, being always temporarily away from home, was the answer the Chinese overseas found to deal with imperial and orthodox concerns. Today their challenge is to find an alternative to either returning or assimilating by seeking a new kind of autonomy in a world that will come to acknowledge the ideal of multicultural states.

In pursuing this story, international scholar Wang Gungwu uncovers some major themes of global history: the coming together of Asian and European civilizations, the ambiguities of ethnicity and diasporic consciousness, and the tension between maintaining one's culture and assimilation.

The Chinese Overseas: From Earthbound China to the Quest for Autonomy

His books since 2008 include, in English: The Eurasian Core and its Edges: Dialogues with Wang Gungwu on the history of the world. (2015); Another China Cycle: Committing to Reform (2014); Renewal: The Chinese State and the New Global History (2013); Wang Gungwu: Educator and Scholar, edited by Zheng Yongnian and Phua Kok Khoo (2013); Wang Gungwu, Junzi, Scholar-gentleman, edited by Asad Latif (2010).