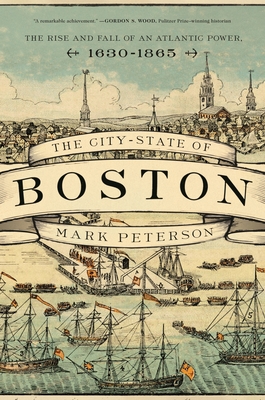 In the vaunted annals of America's founding, Boston has long been held up as an exemplary city upon a hill and the cradle of liberty for an independent United States. Wresting this revered metropolis from these misleading, tired clich�s, The City-State of Boston highlights Boston's overlooked past as an autonomous city-state, and in doing so, offers a pathbreaking and brilliant new history of early America. Following Boston's development over three centuries, Mark Peterson discusses how this self-governing Atlantic trading center began as a refuge from Britain's Stuart monarchs and how--through its bargain with the slave trade and ratification of the Constitution--it would tragically lose integrity and autonomy as it became incorporated into the greater United States. The City-State of Boston peels away layers of myth to offer a startlingly fresh understanding of this iconic urban center.
The City-State of Boston: The Rise and Fall of an Atlantic Power, 1630-1865

His most recent book is The City-State of Boston: The Rise and Fall of an Atlantic Power, 1630-1865 (Princeton University Press, 2019, paperback, 2020), and he is also the author of The Price of Redemption: The Spiritual Economy of Puritan New England (Stanford University Press, 1997).

At the moment, he is at work on two new books for Princeton University Press. The first, The Long Crisis of the Constitution, offers a historical account of the US Constitution as a political compromise based on 18th-century conceptions of power and property, and describes how the slow erosion of its original premises in the face of a changing US population and economy have left the nation politically unmoored.

The second, Revolution’s Ends: A History of the American Revolution for the 21st Century, is a new narrative history of the major conflicts of late-18th-century North America, designed to offer useful frameworks for understanding the processes that generated an independent and consolidated United States, in order to better grasp the prospects for the nation and its place in the world today.

Besides these current projects, Professor Peterson is also planning a third volume of his New England trilogy, focused on the transformation of material culture, consumer demand, and public expenditure from the 16th to the 19th century.  He is also completing an edited volume of the writings of John Hull, a 17th-century Boston merchant, mint-master, and political leader, for publication by the Colonial Society of Massachusetts.  In addition, Professor Peterson also serves as co-editor for the book series, American Beginnings published by the University of Chicago Press.