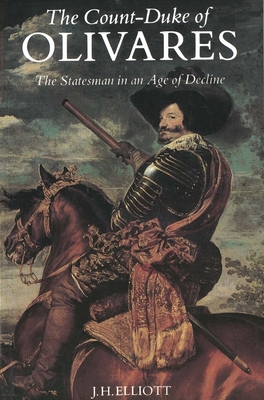 Count-Duke of Olivares: The Statesman in an Age of Decline (Revised)

A masterful biography of Don Gaspar de Guzm�n, Count Duke of Olivares--righthand advisor to Spain's Philip IV, archrival of Cardinal Richelieu, and a central figure in seventeenth-century Europe. Written by the eminent historian J. H. Elliott and based on many original sources, this elegant book is a landmark in the study of a man and an age.
A monument of scholarship almost unique in our time. ... Professor Elliott has written what must rank as the finest biography ever written on a Spanish statesman.--Raymond Carr, New York Review of Books
A wonderful life of Olivares and his time. ... An exceptional biography.--Harold Stone, New York Times Book Review
One of the outstanding works of Spanish historical scholarship written this century.--Henry Kamen, Times Literary Supplement
A perfect blend of biography and history, which brilliantly evokes both the man his milieu. The research is prodigious, the exposition is on the grandest scale, and the book is as much a delight to handle as it is to read.--David Cannadine, New Society
Winner of the 1986 Wolfson Prize in History
J. H. Elliott is professor in the School of Historical Studies at the Institute for Advanced Study, Princeton. He is the author of numerous books, including, Spain and its World 1500-1700 and, with Jonathan Brown, A Palace for a King: The Buen Retiro and the Court of Philip IV.
Count-Duke of Olivares: The Statesman in an Age of Decline (Revised)