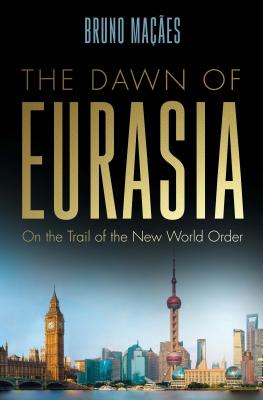 The Dawn of Eurasia: On the Trail of the New World Order

A bold, eye-opening account of the coming integration of Europe and Asia Weaving together history, diplomacy, and vivid personal narratives from his overland journey across Eurasia from Baku to Samarkand, Vladivostok to Beijing, Bruno Ma��es provides a fascinating portrait of the shifting borderlands between Europe and Asia, tracking the economic integration of the two continents into a new supercontinent: Eurasia. As Ma��es demonstrates, glimpses of the coming Eurasianism are already visible in China's bold infrastructure project reopening the historic Silk Road, in the success of cities like Hong Kong and Singapore, in Turkey's increasing global role, and in shifting U.S. foreign policy toward Europe and Asia. This insightful and clarifying book argues that the artificial separation of the world's largest island cannot hold.
The Dawn of Eurasia: On the Trail of the New World Order

Bruno Maçães is a Non-Resident Senior Fellow at the Hudson Institute and a Senior Advisor at Flint Global in London. He was the Portuguese Europe Minister from 2013-2015, and was decorated by Spain and Romania for his services to government.

He received his doctorate in political science from Harvard University, and was a research fellow at the American Enterprise Institute in Washington and Carnegie in Brussels. He has written for the Financial Times, Politico, The Guardian and Foreign Affairs, and appears regularly on CNN, the BBC, Bloomberg, Al-Jazeera and CCTV.