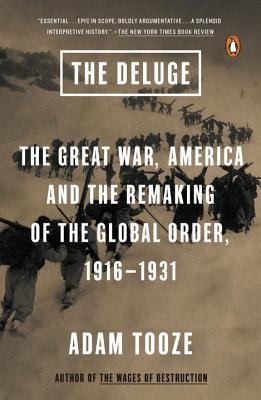 A searing and highly original analysis of the First World War and its anguished aftermath Winner of the Los Angeles Times Book Prize - History
Finalist for the Kirkus Prize - Nonfiction In the depths of the Great War, with millions dead and no imaginable end to the conflict, societies around the world began to buckle. The heart of the financial system shifted from London to New York. The infinite demands for men and mat�riel reached into countries far from the front. The strain of the war ravaged all economic and political assumptions, bringing unheard-of changes in the social and industrialorder. A century after the outbreak of fighting, Adam Tooze revisits this seismic moment in history, challenging the existing narrative of the war, its peace, and its aftereffects. From the day the United States enters the war in 1917 to the precipice of global financial ruin, Tooze delineates the world remade by American economic and military power. Tracing the ways in which countries came to terms with America's centrality--including the slide into fascism--The Deluge is a chilling work of great originality that will fundamentally change how we view the legacy of World War I.
The Deluge: The Great War, America and the Remaking of the Global Order, 1916-1931

Professor Adam Tooze teaches and researches widely in the fields of twentieth-century and contemporary history. From a start in modern German history with a special focus on the history of economics and economic history his interests have widened to take in a range of themes in political, intellectual and military history, across a canvass stretching from Europe across the Atlantic. His most recent book was Crashed: How a Decade of Financial Crises Changed the World (2018).