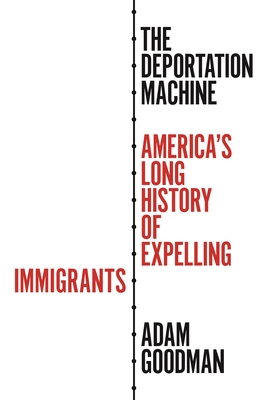 Constant headlines about deportations, detention camps, and border walls drive urgent debates about immigration and what it means to be an American in the twenty-first century. The Deportation Machine traces the long and troubling history of the US government's systematic efforts to terrorize and expel immigrants over the past 140 years. This provocative, eye-opening book provides needed historical perspective on one of the most pressing social and political issues of our time.

In a sweeping and engaging narrative, Adam Goodman examines how federal, state, and local officials have targeted various groups for expulsion, from Chinese and Europeans at the turn of the twentieth century to Central Americans and Muslims today. He reveals how authorities have singled out Mexicans, nine out of ten of all deportees, and removed most of them not by orders of immigration judges but through coercive administrative procedures and calculated fear campaigns. Goodman uncovers the machine's three primary mechanisms--formal deportations, voluntary departures, and self-deportations--and examines how public officials have used them to purge immigrants from the country and exert control over those who remain. Exposing the pervasive roots of anti-immigrant sentiment in the United States, The Deportation Machine introduces the politicians, bureaucrats, businesspeople, and ordinary citizens who have pushed for and profited from expulsion.

This revelatory book chronicles the devastating human costs of deportation and the innovative strategies people have adopted to fight against the machine and redefine belonging in ways that transcend citizenship.

Adam Goodman is an assistant professor in the Latin American and Latino Studies Program and in the Department of History at the University of Illinois at Chicago. His research and teaching interests include migration history and policy; Mexican American and Latina/o history; border and borderlands history; and recent U.S., Mexican, and Central American history.

Goodman's book, The Deportation Machine: America’s Long History of Expelling Immigrants (Princeton University Press, 2020), traces the troubling history of the US government’s systematic efforts to terrorize and expel noncitizens over the past 140 years. The book uncovers public officials' use of force, coercion, and fear to purge immigrants from the country and exert control over those who remain. It introduces the politicians, bureaucrats, businesspeople, and ordinary citizens who have pushed for and profited from expulsion.

The Deportation Machine chronicles the devastating human costs of punitive enforcement policies and the innovative strategies people have adopted to fight against removal and redefine belonging in ways that transcend citizenship.

Goodman has written articles, essays, and reviews that have appeared in academic venues like the Journal of American History and the Journal of American Ethnic History, and in popular outlets such as The Nation and the Washington Post. He has received support for his work from the National Endowment for the Humanities, Fulbright Program, and Immigration and Ethnic History Society, among others.

In 2017, Goodman helped organize the #ImmigrationSyllabus project. He co-organizes the Borderlands and Latino/a Studies Seminar at the Newberry Library and the Global Migration Working Group at UIC, where he also serves as a faculty advisor to the Fearless Undocumented Alliance.