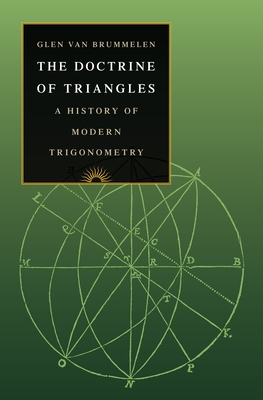 The Doctrine of Triangles: A History of Modern Trigonometry

The Doctrine of Triangles offers an interdisciplinary history of trigonometry that spans four centuries, starting in 1550 and concluding in the 1900s. Glen Van Brummelen tells the story of trigonometry as it evolved from an instrument for understanding the heavens to a practical tool, used in fields such as surveying and navigation. In Europe, China, and America, trigonometry aided and was itself transformed by concurrent mathematical revolutions, as well as the rise of science and technology.

Following its uses in mid-sixteenth-century Europe as the foot of the ladder to the stars and the mathematical helpmate of astronomy, trigonometry became a ubiquitous tool for modeling various phenomena, including animal populations and sound waves. In the late sixteenth century, trigonometry increasingly entered the physical world through the practical disciplines, and its societal reach expanded with the invention of logarithms. Calculus shifted mathematical reasoning from geometric to algebraic patterns of thought, and trigonometry's participation in this new mathematical analysis grew, encouraging such innovations as complex numbers and non-Euclidean geometry. Meanwhile in China, trigonometry was evolving rapidly too, sometimes merging with indigenous forms of knowledge, and with Western discoveries. In the nineteenth century, trigonometry became even more integral to science and industry as a fundamental part of the science and engineering toolbox, and a staple subject in high school classrooms.

A masterful combination of scholarly rigor and compelling narrative, The Doctrine of Triangles brings trigonometry's rich historical past full circle into the modern era.

The Doctrine of Triangles: A History of Modern Trigonometry

Glen is a historian of mathematics and astronomy in ancient and medieval cultures, sometimes described as the only historian of trigonometry in the world.

Prior to TWU, he was a founding faculty member and mathematics division coordinator of Quest University Canada. He won the Mathematical Association of America’s Haimo Award for Distinguished Teaching in 2016, and the 3M National Teaching Fellowship in 2017.

Glen studies the interactions between mathematics and science in premodern cultures. He is especially interested in trigonometric methods in ancient Greek, medieval Islamic, and medieval European astronomy. Recently he has been working as a member of the European Research Council-funded team ALFA (Alfonsine Astronomy), exploring the development of spherical astronomy in medieval and early Renaissance Europe and its links to Greek and Islamic predecessors.

His research has recently uncovered the beginning of the modern tangent and arc sine functions, and he is currently exploring the origin of our modern decimal positional numeration in the astronomical tables of the 15th century.