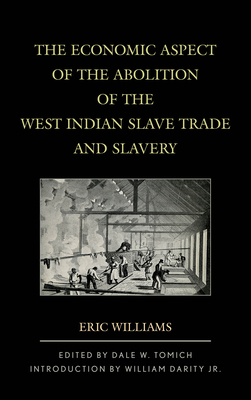 In his influential and widely debated Capitalism and Slavery, Eric Williams examined the relation of capitalism and slavery in the British West Indies. Binding an economic view of history with strong moral argument, his study of the role of slavery in financing the Industrial Revolution refuted traditional ideas of economic and moral progress and firmly established the centrality of the African slave trade in European economic development. He also showed that mature industrial capitalism in turn helped destroy the slave system. Establishing the exploitation of commercial capitalism and its link to racial attitudes, Williams employed a historicist vision that has set the tone for an entire field. Williams's profound critique became the foundation for studies of imperialism and economic development and has been widely debated since the book's initial publication in 1944. The Economic Aspect of the Abolition of the West Indian Slave Trade and Slavery now makes available in book form for the first time his dissertation, on which Capitalism and Slavery was based. The significant differences between his two works allow us to rethink questions that were considered resolved and to develop fresh problems and hypotheses. It offers the possibility of a much deeper reconsideration of issues that have lost none of their urgency-indeed, whose importance has increased.
The Economic Aspect of the Abolition of the West Indian Slave Trade and Slavery

Williams was educated at Queen’s Royal College, Port of Spain, and at the University of Oxford, from which he received a B.A. in 1932 and a D.Phil. in 1938, with studies in history and political science. In 1939 he went to the United States and joined the faculty of social and political science at Howard University. While he was at Howard, Williams became associated with the Caribbean Commission that was established by the United States, Great Britain, France, and the Netherlands in an effort to coordinate the economic development of the Caribbean area. His aggressive, commanding role in the commission, however, tended to alienate the national powers, especially the United States, and in 1955–56 he organized the PNM party, which won the 1956 general elections. He became chief minister in the country’s first party government, and, with the achievement of internal self-government in 1959, he served as premier. The PNM won the December 1961 elections by a landslide. Williams became prime minister of the colony and then of the new nation upon its achieving independence in August 1962. He made the country a republic in 1976.

As prime minister, Williams practiced what was called “pragmatic socialism,” which stressed social services, improved education, and economic development through the cautious attraction of foreign investment capital. The policy was fruitful in making Trinidad and Tobago the wealthiest Commonwealth Caribbean nation. He was successively reelected and served as prime minister until his death.