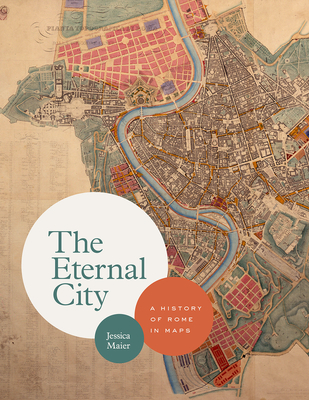 The Eternal City: A History of Rome in Maps

One of the most visited places in the world, Rome attracts millions of tourists each year to walk its storied streets and see famous sites like the Colosseum, St. Peter's Basilica, and the Trevi Fountain. Yet this ancient city's allure is due as much to its rich, unbroken history as to its extraordinary array of landmarks. Countless incarnations and eras merge in the Roman cityscape. With a history spanning nearly three millennia, no other place can quite match the resilience and reinventions of the aptly nicknamed Eternal City.

In this unique and visually engaging book, Jessica Maier considers Rome through the eyes of mapmakers and artists who have managed to capture something of its essence over the centuries. Viewing the city as not one but ten Romes, she explores how the varying maps and art reflect each era's key themes. Ranging from modest to magnificent, the images comprise singular aesthetic monuments like paintings and grand prints as well as more popular and practical items like mass-produced tourist plans, archaeological surveys, and digitizations. The most iconic and important images of the city appear alongside relatively obscure, unassuming items that have just as much to teach us about Rome's past. Through 140 full-color images and thoughtful overviews of each era, Maier provides an accessible, comprehensive look at Rome's many overlapping layers of history in this landmark volume.

The first English-language book to tell Rome's rich story through its maps, The Eternal City beautifully captures the past, present, and future of one of the most famous and enduring places on the planet.

The Eternal City: A History of Rome in Maps

Jessica Maier teaches European Renaissance and Baroque art and architecture with an eye to global interactions. In her research and in the classroom, she focuses on traditionally overlooked categories of imagery such as prints, illustrated books, maps, and city views.

Maier holds degrees from Columbia and Brown Universities and is the recipient of fellowships from the American Academy in Rome as well as Villa I Tatti in Florence. Her first book, Rome Measured and Imagined: Early Modern Maps of the Eternal City, was published by the University of Chicago Press in 2015. Her articles have appeared in The Art Bulletin, Renaissance Quarterly, Imago Mundi, and many other places. She is currently working on a second book project with the working title Contested Places: Cartography, Conflict, and the Visual Arts in Early Modern Europe.

Maier previously taught at the University of Oregon and Tulane University. She has also offered courses in the U.S. and in Italy for Columbia University, Dartmouth College, and Louisiana State University. At Mount Holyoke since 2011, Maier teaches a wide range of classes designed to appeal to majors and non-majors alike: from an introductory survey entitled Ways of Seeing to a sequence of Renaissance lecture courses devoted to Italian, Northern, and transnational perspectives, as well as seminars on Leonardo da Vinci, early modern Rome, and art historical methods.