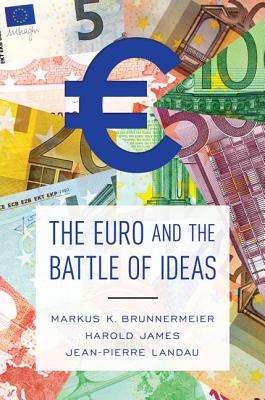 The Euro and the Battle of Ideas

Why is Europe's great monetary endeavor, the Euro, in trouble? A string of economic difficulties in Greece, Ireland, Spain, Italy, and other Eurozone nations has left observers wondering whether the currency union can survive. In this book, Markus Brunnermeier, Harold James, and Jean-Pierre Landau argue that the core problem with the Euro lies in the philosophical differences between the founding countries of the Eurozone, particularly Germany and France. But the authors also show how these seemingly incompatible differences can be reconciled to ensure Europe's survival.

As the authors demonstrate, Germany, a federal state with strong regional governments, saw the Maastricht Treaty, the framework for the Euro, as a set of rules. France, on the other hand, with a more centralized system of government, saw the framework as flexible, to be overseen by governments. The authors discuss how the troubles faced by the Euro have led its member states to focus on national, as opposed to collective, responses, a reaction explained by the resurgence of the battle of economic ideas: rules vs. discretion, liability vs. solidarity, solvency vs. liquidity, austerity vs. stimulus.

Weaving together economic analysis and historical reflection, The Euro and the Battle of Ideas provides a forensic investigation and a road map for Europe's future.

The Euro and the Battle of Ideas

Markus K. Brunnermeier is the Edwards S. Sanford Professor at Princeton University. He is a faculty member of the Department of Economics and director of Princeton's Bendheim Center for Finance. He is also a research associate at NBER, CEPR, and CESifo and a member of the Bellagio Group on the International Economy. He is a Sloan Research Fellow, Fellow of the Econometric Society, Guggenheim Fellow  and the recipient of the Bernácer Prize granted for outstanding contributions in the fields of macroeconomics and finance.

He is/was a member of several advisory groups, including to the IMF, the Federal Reserve of New York, the European Systemic Risk Board, the Bundesbank and the U.S. Congressional Budget Office. Brunnermeier was awarded his Ph.D. by the London School of Economics (LSE).

His research focuses on international financial markets and the macroeconomy with special emphasis on bubbles, liquidity, financial and monetary price stability. To explore these topics, his models incorporate frictions as well as behavioral elements. He has been awarded  several best paper prizes and served on the editorial boards of several leading economics and finance journals.