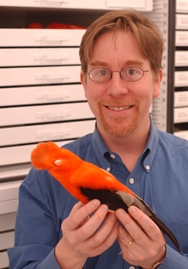 The Evolution of Beauty: How Darwin's Forgotten Theory of Mate Choice Shapes the Animal World - and Us

Richard O. Prum is William Robertson Coe Professor of Ornithology at Yale University, and Head Curator of Vertebrate Zoology at the Yale Peabody Museum of Natural History. He has conducted field work throughout the world, and has studied fossil theropod dinosaurs in China. He received a MacArthur Fellowship in 2010.