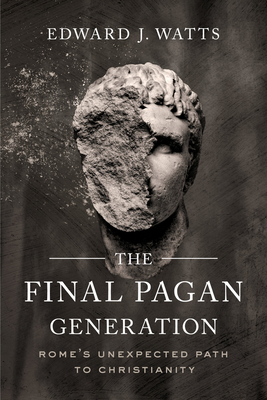 A compelling history of radical transformation in the fourth-century--when Christianity decimated the practices of traditional pagan religion in the Roman Empire.

The Final Pagan Generation recounts the fascinating story of the lives and fortunes of the last Romans born before the Emperor Constantine converted to Christianity. Edward J. Watts traces their experiences of living through the fourth century's dramatic religious and political changes, when heated confrontations saw the Christian establishment legislate against pagan practices as mobs attacked pagan holy sites and temples. The emperors who issued these laws, the imperial officials charged with implementing them, and the Christian perpetrators of religious violence were almost exclusively young men whose attitudes and actions contrasted markedly with those of the earlier generation, who shared neither their juniors' interest in creating sharply defined religious identities nor their propensity for violent conflict. Watts examines why the final pagan generation--born to the old ways and the old world in which it seemed to everyone that religious practices would continue as they had for the past two thousand years--proved both unable to anticipate the changes that imperially sponsored Christianity produced and unwilling to resist them. A compelling and provocative read, suitable for the general reader as well as students and scholars of the ancient world.

Professor Watts received his PhD in History from Yale University in 2002. His research interests center on the intellectual and religious history of the Roman Empire and the early Byzantine Empire.

His first book, City and School in Late Antique Athens and Alexandria (University of California Press, 2006), explains how the increasingly Christian upper class of the late antique world used a combination of economic and political pressures to neutralize pagan elements of the traditional educational system.

City and School received the Outstanding Publication Award from the Classical Association of the Middle West and South in 2007. His second book, Riot in Alexandria: Historical Debate in Pagan and Christian Communities (University of California Press, 2010), uses Greek, Latin, Coptic, and Syriac sources to reconstruct an Alexandrian riot that erupted in 486 AD. Riot received a 2010 PROSE Award Honorable Mention in Classics and Ancient History.

His third book, The Final Pagan Generation (University of California Press, 2015) offers a generational history of the men born in the 310s that traces the experience of living through the fourth century’s dramatic religious and political changes. It was awarded the 2015 Phi Alpha Theta Best Subsequent Book Prize.

His fourth book, Hypatia: The Life and Legend of an Ancient Philosopher (Oxford University Press, 2017) recounts the life of an important female philosopher whose work redefined philosophy and whose death resonated as a symbol of dramatic religious and social change in the early fifth century. He is also the author of Mortal Republic: How Rome Fell into Tyranny (Basic Books, 2018).

In addition to these five books, he has co-edited five other volumes (From the Theodosians to the Tetrarchs [Cambridge, 2010]; Shifting Cultural Frontiers in Late Antiquity [Ashgate, 2012]; Freedom of Speech and Self Censorship in Late Antiquity [a special issue of the Revue Belge published in 2014]; Late Antique Letter Collections: A Critical Introduction and Reference Guide [University of California Press, 2016], and the Blackwell Companion to Late Antique Literature [Wiley-Blackwell, forthcoming]. He has also authored more than 40 articles on topics ranging from the Old Academy in the fourth century BC to the relationship between orality and textuality in the early Byzantine period.

He is currently preparing a monograph tracing the Romanization and de-Romanization of the Mediterranean world between 96 and 850 AD (The Rise and Fall of the Roman Nation, [Oxford University Press, forthcoming]) and is co-authoring a volume introducing the historical and classroom uses of Roman imperial coins.

Dr. Watts was the director of the Center for Hellenic Studies from 2014-2016.