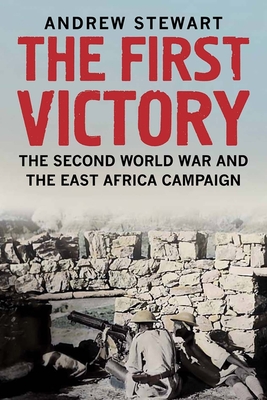 The First Victory: The Second World War and the East Africa Campaign

A riveting new account of the long-overlooked achievement of British-led forces who, against all odds, scored the first major Allied victory of the Second World War Surprisingly neglected in accounts of Allied wartime triumphs, in 1941 British and Commonwealth forces completed a stunning and important victory in East Africa against an overwhelmingly superior Italian opponent. A hastily formed British-led force, never larger than 70,000 strong, advanced along two fronts to defeat nearly 300,000 Italian and colonial troops. This compelling book draws on an array of previously unseen documents to provide both a detailed campaign history and a fresh appreciation of the first significant Allied success of the war. Andrew Stewart investigates such topics as Britain's African wartime strategy; how the fighting forces were assembled (most from British colonies, none from the U.S.); General Archibald Wavell's command abilities and his difficult relationship with Winston Churchill; the resolute Italian defense at Keren, one of the most bitterly fought battles of the entire war; the legacy of the campaign in East Africa; and much more.
The First Victory: The Second World War and the East Africa Campaign

Professor Andrew Stewart is a Visiting Professor in the School of Security Studies, King's College London. He completed his undergraduate degree in the Department of War Studies, King's College London and remained in the same department to study part-time for his doctorate. In December 2001 he was awarded his PhD for an analysis of the workings of the Dominions Office during the Second World War. During this period Professor Stewart also worked as a geopolitical analyst for a small UK consultancy where he studied terrorism and African security issues.

Leaving the consultancy as Managing Director in 2002, Professor Stewart joined the Defence Studies Department, initially as a Teaching Fellow before securing a permanent position four years later. He was promoted to Senior Lecturer in 2009 and appointed as Reader in 2014. Having spent three years as the Land Historian supporting the Higher Command and Staff Course, from 2014 to 2017 he was seconded to the Royal College of Defence Studies and appointed to the new role of Director of Academic Studies (KCL).

He was appointed as Professor of Modern Conflict History in 2018. One of the Founding Directors of the King’s Second World War Research Group he currently heads its advisory group. He is also a trustee of the Liddell Hart Centre for Military Archives. In January 2020 he started his new role in Canberra as Professor of War Studies and Principal MDSP (Military and Defence Studies Program) dividing his time between the Australian National University’s Strategic and Defence Studies Centre and the Australian War College.