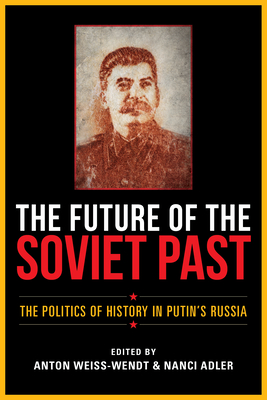 The Future of the Soviet Past: The Politics of History in Putin's Russia

In post-Soviet Russia, there is a persistent trend to repress, control, or even co-opt national history. By reshaping memory to suit a politically convenient narrative, Russia has fashioned a good future out of a bad past.

While Putin's regime has acquired nearly complete control over interpretations of the past, The Future of the Soviet Past reveals that Russia's inability to fully rewrite its Soviet history plays an essential part in its current political agenda. Diverse contributors consider the many ways in which public narrative shapes Russian culture--from cinema, television, and music to museums, legislature, and education--as well as how patriotism reflected in these forms of culture implies a casual acceptance of the valorization of Stalin and his role in World War II.

The Future of the Soviet Past provides effective and nuanced examples of how Russia has reimagined its Soviet history as well as how that past still influences Russia's policymaking.

The Future of the Soviet Past: The Politics of History in Putin's Russia

Anton Weiss-Wendt is a Norwegian academic and historian

For his Charles H. Revson Foundation Fellowship for Archival Research, Mr. Weiss-Wendt conducted research for his project “The Holocaust in Estonia: The Problem of Indigenous Collaboration.”

Mr. Weiss-Wendt has published several articles in scholarly journals including, “Extermination of the Gypsies in Estonia during World War II” in Holocaust and Genocide Studies (Spring 2003); “What We Make out of the Holocaust: American and Estonia Compared,” in Vikerkaar (Spring 2001); and “The Soviet Occupation of Estonia in 1940-1941 and the Jews,” in Holocaust and Genocide Studies (Fall 1998).

He has presented his research at major international scholarly conferences.

In 1999, he spoke on Estonian collaboration at the United States Holocaust Memorial Museum’s symposium, Perspectives on Indigenous Collaboration in the Baltic States during the German Occupation. He has worked for the Robert Wagner Labor Archives at New York University, the Andrei Sakharov Archives at Brandeis, and the U.S. Department of Justice’s Office of Special Investigations.

He is the recipient of numerous awards including Dorot and Fulbright Fellowships as well as grants from the Soros Foundation, Max Kade Foundation, and German-American Exchange Program (DAAD).