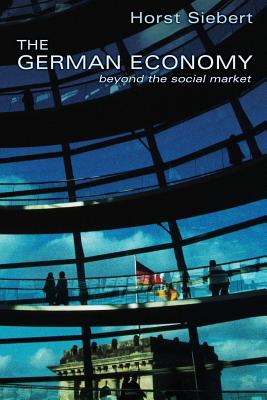 The German Economy: Beyond the Social Market

In this book, one of Germany's most influential economists describes his country's economy, the largest in the European Union and the third largest in the world, and analyzes its weaknesses: poor GDP growth performance, high unemployment due to a malfunctioning labor market, and an unsustainable social security system. Horst Siebert spells out the reforms necessary to overcome these shortcomings. Taking a broader view than other recent books on the German economy, he considers Germany's fiscal policy stance, product market regulation, capital market, environmental policy, aging and immigration policies, and its system for human capital formation as well as Germany's role in the European Union, including the euro zone.

Germany's system of economic governance emerges as a common theme as Siebert examines why this onetime economic powerhouse is today a faltering giant. He argues that what Germany needs, above all, is a market renaissance; that it must throw off the shackles of its social welfare economy and of its hallmark consensus approach, whereby group-based cooperative decision-making has undermined competition and markets. In doing so he examines both the country's social security system and its labor market, including trade unions. His focus throughout is on Germany's present concerns, foreseeable future problems, and long-term policy issues. The definitive word on the postwar German economy to the present day, The German Economy is essential reading for economists and finance professionals as well as students, researchers, and others interested in modern-day Germany and its place and prospects at the heart of Europe.
The German Economy: Beyond the Social Market

After studying in Cologne and at Wesleyan University in Connecticut, doctorate (1965) and habilitation (1969) in Münster, he was called to the Universities of Mannheim (1969) and Constance (1984). In 1989, Siebert moved to the Christian-Albrechts-University of Kiel and succeeded Herbert Giersch as President of the Kiel Institute. He was also a member of the German Council of Economic Experts for a large part of his term of office (1990 - 2003).

Siebert introduced environmental economic research at the Kiel Institute and focused on systemic ruptures in Germany and the world after 1989. He focused the Institute's research and consulting on institution-building in post-socialist societies, on the connections between monetary stabilization, real economic adjustment and institutional incentives, and international debt crises. Siebert was in great demand as a consultant in international bodies (EU, IMF, World Economic Forum). He made an impact on the public interested in economic policy through numerous publications and media appearances, in which he warned of undesirable developments on labor markets and the dangers of false incentives in the economy.

After his retirement, Siebert remained active in research and consulting and taught at the Bologna Center of the Paul H. Nitze School for Advanced Studies. Numerous textbooks, among others on foreign trade and environmental economics, established his reputation as an outstanding teacher.