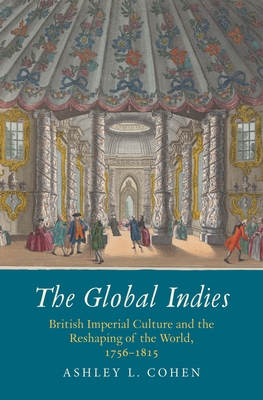 The Global Indies: British Imperial Culture and the Reshaping of the World, 1756-1815

A study of British imperialism's imaginative geography, exploring the pairing of India and the Atlantic world from literature to colonial policy In this lively book, Ashley Cohen weaves a complex portrait of the imaginative geography of British imperialism. Contrary to most current scholarship, eighteenth-century Britons saw the empire not as separate Atlantic and Indian spheres but as an interconnected whole: the Indies. Crisscrossing the hemispheres, Cohen traces global histories of race, slavery, and class, from Boston to Bengal. She also reveals the empire to be pervasively present at home, in metropolitan scenes of fashionable sociability. Close-reading a mixed archive of plays, poems, travel narratives, parliamentary speeches, political pamphlets, visual satires, paintings, memoirs, manuscript letters, and diaries, Cohen reveals how the pairing of the two Indies in discourse helped produce colonial policies that linked them in practice. Combining the methods of literary studies and new imperial history, Cohen demonstrates how the imaginative geography of the Indies shaped the culture of British imperialism, which in turn changed the shape of the world.
The Global Indies: British Imperial Culture and the Reshaping of the World, 1756-1815