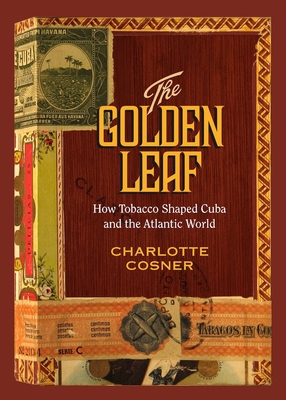 The Golden Leaf: How Tobacco Shaped Cuba and the Atlantic World

Through the rise and fall of empires, ideologies, and economies, tobacco grown on the tiny island of Cuba has remained an enduring symbol of pleasure and extravagance. Cultivated as one of the first reliable commodities for those inhabitants who remained after conquistadors moved on in search of a mythical wellspring of gold, tobacco quickly became crucial to the support of the swelling Spanish Empire in the seventeenth and eighteenth centuries. Eventually, however, tobacco became one of the final stabilizing forces in the empire, and it ultimately proved more resilient than the best laid plans of kings and queens. Tobacco, and those whose livelihoods depended on it, shrugged off the Empire's collapse and pressed on into the twentieth century as an economic force any state or political power must reckon with.

Cosner explores the history of this golden leaf through the personal narratives of farmers, bureaucrats, and laborers, all struggling to build an independent and lucrative economic engine. Through conquest, rebellion, colonial and imperial schemes, and the eventual Communist revolution, Cuban tobacco and cigars became a luxury item that commanded loyalty that defied mere borders or embargoes. Ultimately, The Golden Leaf is a story of two carefully cultivated products: Cuban tobacco, and its lofty reputation.

The Golden Leaf: How Tobacco Shaped Cuba and the Atlantic World

Charlotte Cosner is Assistant Professor of Western Carolina University Department of History. Her latest book focuses on the American plan tobacco shaped modern Cuba and Spanish imperial policy for the Caribbean island but with other Atlantic Empires including England, France and American Nation-States.