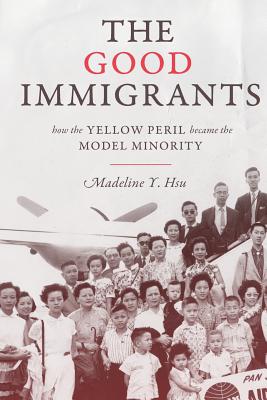 The Good Immigrants: How the Yellow Peril Became the Model Minority

Conventionally, US immigration history has been understood through the lens of restriction and those who have been barred from getting in. In contrast, The Good Immigrants considers immigration from the perspective of Chinese elites--intellectuals, businessmen, and students--who gained entrance because of immigration exemptions. Exploring a century of Chinese migrations, Madeline Hsu looks at how the model minority characteristics of many Asian Americans resulted from US policies that screened for those with the highest credentials in the most employable fields, enhancing American economic competitiveness.

The earliest US immigration restrictions targeted Chinese people but exempted students as well as individuals who might extend America's influence in China. Western-educated Chinese such as Madame Chiang Kai-shek became symbols of the US impact on China, even as they patriotically advocated for China's modernization. World War II and the rise of communism transformed Chinese students abroad into refugees, and the Cold War magnified the importance of their talent and training. As a result, Congress legislated piecemeal legal measures to enable Chinese of good standing with professional skills to become citizens. Pressures mounted to reform American discriminatory immigration laws, culminating with the 1965 Immigration Act.

Filled with narratives featuring such renowned Chinese immigrants as I. M. Pei, The Good Immigrants examines the shifts in immigration laws and perceptions of cultural traits that enabled Asians to remain in the United States as exemplary, productive Americans.

The Good Immigrants: How the Yellow Peril Became the Model Minority

Madeline Y. Hsu is Professor of History at the University of Texas at Austin and served as Director of the Center for Asian American Studies eight years (2006-2014).

She was president of the Immigration and Ethnic History Society and is presently representative-at-large for the International Society for the Study of Chinese Overseas.  She was born in Columbia, Missouri but grew up in Taiwan and Hong Kong between visits with her grandparents at their store in Altheimer, Arkansas.

She received her undergraduate degrees in History from Pomona College and PhD from Yale University.  Her first book was Dreaming of Gold, Dreaming of Home: Transnationalism and Migration between the United States and South China, 1882-1943 (Stanford University Press, 2000).

Her most recent monograph, The Good Immigrants: How the Yellow Peril Became the Model Minority (Princeton University Press, 2015), received awards from the Society for Historians of American Foreign Relations, the Immigration and Ethnic History Society, the Asian Pacific American Librarians Association, and the Association for Asian American Studies.

Her third book, Asian American History: A Very Short Introduction was published by Oxford University Press in 2016 and the co-edited anthology, A Nation of Immigrants Reconsidered: U.S. Society in an Age of Restriction, 1924-1965 was published in 2019 by the University of Illinois Press.

Source: The University of Texas at Austin Department of History