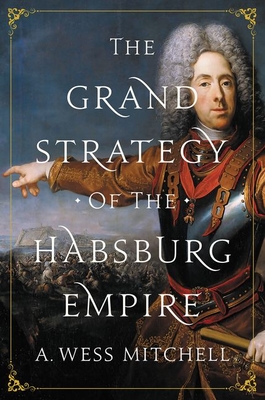 The Grand Strategy of the Habsburg Empire

The Empire of Habsburg Austria faced more enemies than any other European great power. Flanked on four sides by rivals, it possessed few of the advantages that explain successful empires. Yet somehow Austria endured, outlasting Ottoman sieges, Frederick the Great, and Napoleon. A. Wess Mitchell tells the story of how this cash-strapped, polyglot empire survived for centuries in Europe's most dangerous neighborhood without succumbing to the pressures of multisided warfare. He shows how the Habsburgs played the long game in geopolitics, corralling friend and foe alike into voluntarily managing the empire's lengthy frontiers and extending a benign hegemony across the turbulent lands of middle Europe. The Grand Strategy of the Habsburg Empire offers lessons on how to navigate a messy geopolitical map, stand firm without the advantage of military predominance, and prevail against multiple rivals.
The Grand Strategy of the Habsburg Empire

Dr. A. Wess Mitchell served as Assistant Secretary of State for European and Eurasian Affairs from 2017 to 2019. In this role, he was responsible for diplomatic relations with the 50 countries of Europe and Eurasia, as well as the institutions of NATO, the EU, and OSCE. At State Department, Mitchell played a principal role in formulating Europe strategy in support of the 2017 National Security Strategy, led the Interagency in building instruments to counter Russian and Chinese influence in Europe, and spearheaded new diplomatic initiatives for Central Europe, the Eastern Mediterranean, and Western Balkans.

Prior to joining the State Department, Mitchell cofounded and served as President and CEO of the Center for European Policy Analysis (CEPA). Mitchell is the author of numerous articles and reports that have been translated into a dozen languages and appeared in publications such as The Wall Street Journal, Washington Post, American Interest, National Interest, Orbis, and Internationale Politik. He is the author of three books, including most recently Unquiet Frontier: Rising Rivals, Vulnerable Allies and the Crisis of American Power (with Jakub J. Grygiel) and The Grand Strategy of the Habsburg Empire (Princeton University Press, 2018).

Mitchell holds a doctorate in political science from the Otto Suhr Institut für Politikwissenschaft at Freie Universität in Berlin, a master’s degree from the Center for German and European Studies at Georgetown University’s Edmund A. Walsh School of Foreign Service, where he was awarded the 2004 Hopper Award, and a bachelor’s degree in history from Texas Tech University. During the 2012 Presidential campaign, Mitchell served on the national security team of Gov. Mitt Romney. From 2013 to 2016, he chaired the Europe Working Group of the John Hay Initiative. He has been awarded the Gold Medal of the Minister of Foreign Affairs of the Slovak Republic, the Commander’s Cross of the Order of Merit of Hungary, and the Officer's Cross of the Order of Merit of the Republic of Poland.

Mitchell formerly served as a senior advisor to the Secretary of State. He currently serves as the vice chairman of the board of directors at CEPA, senior advisor at the U.S. Institute of Peace, and Non-Resident Fellow in the Applied History Project at Harvard University Kennedy School of Government’s Belfer Center. A sixth generation Texan, he lives with his family in Virginia.