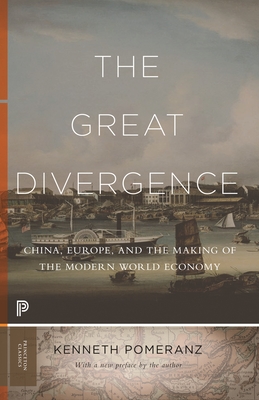 The Great Divergence: China, Europe, and the Making of the Modern World Economy

The Great Divergence sheds light on one of the great questions of history: Why did sustained industrial growth begin in Northwest Europe? Historian Kenneth Pomeranz shows that as recently as 1750, life expectancy, consumption, and product and factor markets were comparable in Europe and East Asia. Moreover, key regions in China and Japan were no worse off ecologically than those in Western Europe, with each region facing corresponding shortages of land-intensive products. Pomeranz's comparative lens reveals the two critical factors resulting in Europe's nineteenth-century divergence-the fortunate location of coal and access to trade with the New World. As East Asia's economy stagnated, Europe narrowly escaped the same fate largely due to favorable resource stocks from underground and overseas. This Princeton Classics edition includes a preface from the author and makes a powerful historical work available to new readers.

The Great Divergence: China, Europe, and the Making of the Modern World Economy

Kenneth Pomeranz is a University Professor of History and in the College; he previously taught at the University of California, Irvine. His work focuses mostly on China, though he is also very interested in comparative and world history.

Most of his research is in social, economic, and environmental history, though he has also worked on state formation, imperialism, religion, gender, and other topics.

His publications include The Great Divergence: China, Europe, and the Making of the Modern World Economy (2000), which won the John K. Fairbank Prize from the AHA, and shared the World History Association book prize; The Making of a Hinterland: State, Society and Economy in Inland North China, 1853–1937 (1993), which also won the Fairbank Prize; The World that Trade Created (with Steven Topik, first edition 1999, 3rd edition 2012), and a collection of his essays, recently published in France.

He has also edited or co-edited five books, and was one of the founding editors of the Journal of Global History. He is a fellow of the American Academy of Arts and Sciences and has received fellowships from the Guggenheim Foundation, the American Philosophical Society, American Council of Learned Societies, the Institute for Advanced Studies, the National Endowment for the Humanities, and other sources.

His current projects include a history of Chinese political economy from the seventeenth century to the present, and a book called Why Is China So Big? which tries to explain, from various perspectives, how and why contemporary China's huge land mass and population have wound up forming a single political unit.

Reciprocal influences of state, society, and economy in late Imperial and twentieth-century China; the origins of a world economy as the outcome of mutual influences among various regions; environmental history in China; comparative studies of labor, family organization, and economic change in Europe and East Asia; expansion of China to its present frontiers.

Source: The Department of History University of Chicago